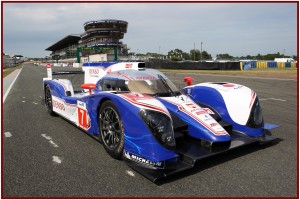 The pair of Toyota Racing TS030 hybrids were competitive in their first Le Mans test session. Endurance is of course unknown.

Two new race car entrants – Toyota with a pair of TS030 hybrid cars and Nissan with its lightweight DeltaWing – successfully participated in the traditional test day to prepare for the Le Mans 24 Hours on 16-17 June. They were joined on the Circuit de la Sarthe in Le Mans by Audi diesel R18 ultra and R18 e-tron Quattro models, the latter another hybrid design of sorts. Missing, sadly, was Peugeot, which last year placed four Peugeot 908s in the Top Five finishing list, but whose endurance-racing program fell victim to the ongoing Eurozone crisis and auto sales slump in Western Europe.

The fastest LM P1 class (Le Mans Prototype 1) is seeing this year the emergence of systems for kinetic energy recovery systems (KERS). Storage capacitors (Toyota) or a flywheel (Audi), return energy the wheels. To be considered as a hybrid, an LM P1 must be able to move the entire length of pit lane at 60 km/h using only its KERS. The key to success here could be using the additional power to accelerate out of the turns or for improving fuel economy, thereby limiting pit stops or a combination of both. At Audi recovered energy is fed to the front wheels of the car, which must be running above 120 km/h for the transmission to take place. For Toyota, on the other hand, the energy is fed to the rear wheels and there is no minimum speed. How these quirky official technical rulings – biased toward the elimination or at least the discouragement of all-wheel-drive – will affect the race remains to be seen.

Audi has been dominate at Le Mans in recent years, of course, including an overall victory last year for a total of ten, which means Audi now has one more victory than Ferrari, although Porsche still holds the factory record with 16 and has announced a return in a couple of years. True to trend, an Audi hybrid posted the fastest lap, but single lap times are relatively meaningless in the world’s most famous 24-hour endurance race, which last year saw the winning Audi R18 complete 355 laps around the 13.629 km (8.469 mile) circuit for a total of 4838 km (3006 miles). 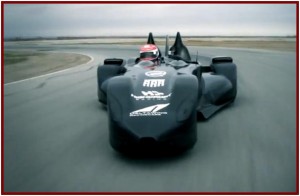 Nissan DeltaWing will wear the number 0, which may or may not indicate the amount of interest among endurance racing enthusiasts.

The Nissan DeltaWing completed 54 laps with drivers Michael Krumm, Satoshi Motoyama and Marino Franchitti at the wheel. The fastest DeltaWing lap of the day was 3 minutes, 47.980 seconds. The DeltaWing team, led by concept originator Ben Bowlby, said they are comfortably within reach of their target pace of 3 minutes, 45 seconds as requested by race officials. With Motoyama not having raced at Le Mans since 1999 and Krumm since 2005, both drivers had to complete a mandatory 10 laps to qualify for the race, which they easily did.

DeltaWing is powered by a Nissan 1.6-liter, four-cylinder engine with direct injection rated at 300 horsepower, adequate in theory to give the DeltaWing lap times between the fierce  LMP1 (megabucks factory entries) and LMP2 machines (private teams running older LMP1 cars, with 14 entries with Nissan racing engines) at Le Mans, which weigh twice as much and have a corresponding increase in power. DeltaWing does not conform to any existing racing championship regulations, so it is a technical curiosity at best.

With all racing organizations searching for relevance, or perhaps a return to something bearing the resemblance of actual production cars, it is not surprising that the Automobile Club de l’Ouest, organizers of the Le Mans 24 Hours, will allow the Dan Gurney built car to run in this year’s race. DeltaWing will occupy the ‘Garage 56′ spot on pit lane reserved for experimental cars. It will wear the number 0, which may not indicate the amount of interest among racing enthusiasts if the DeltaWing runs well and runs long.

The other unknown is Toyota. Stéphane Sarrazin, a key driver, missed the activities to give him additional time to recover from cuts and bruises sustained in a cycling accident. He will be back when practice opens next week.

“Today was a significant step for us because it was our first chance to see the car on track against our opposition at Le Mans,” said Yoshiaki Kinoshita, Team President. “It’s hard to judge lap times but it certainly strengthens our racing spirit. Overall, we are satisfied to complete a full day’s running with both cars without any significant issue; the only interruptions came with some minor bodywork damage.”

As is well known among racing enthusiasts, practice is one thing but the contest is decided during the running of the race. Here, the odds-on favorite has to be Audi, given its recent history, including a well-financed winter testing program and an earlier victory at Spa, a race Toyota missed because it wasn’t ready after a testing accident severely damaged what was then its only hybrid car.

To be fair, Toyota hadn’t planned on racing this year, but when the program was approved last October, the racing department went all out and decided to run in 2012, saying the long term goal was to win and that it was “impatient for results.” Since its first drive on 13 January, the TS030 HYBRID has completed 18 testing days predominantly at Paul Ricard in France, but also at MotorLand Aragon (Spain), Magny-Cours (France) and Le Mans itself.

“Our day was very productive but ended in disappointment. Dindo (Capello) already felt very comfortable in the car and Tom (Kristensen) further improved balance. That meant I took over a car that was set up well for the areas of the track that have new tarmac,” said McNish.

“As always, grip was low on the dirty track at the beginning of the test day. I drove fast and consistent lap times. Unfortunately, toward the end while entering Tertre Rouge I briefly touched the grass, spun 360 degrees and touched the guardrails. That unfortunately ended the day but we’ve got a good starting point for the race week,” according to McNish.

Well yes, McNish crashed as will happen when a driver is quick and exploring the limits, and McNish was without question quick.

The two Audi R18 e-tron quattro and the R18 ultra vehicles covered a total distance of 4,497 kilometers on the circuit during test day. The hybrid energy comes from using regenerative braking to produce electricity that accelerates a carbon fiber flywheel running in a vacuum to as much as 45,000 revolutions per minute. Audi said that after cornering, this energy is available again to power the electric motors of the MGU unit that in turn drive the front wheels. Up to 150 kW of short-term power (204 horsepower) can be supplied to the front axle with the setup on the seven sections of the Le Mans track where it is possible to use the boost.

Marco Bonanomi, the only Audi factory driver who has previously never participated in the Le Mans 24 Hours, qualified for the grid by completing ten mandatory laps and numerous additional kilometers in the number “4” Audi R18 ultra.

So on we go to Le Mans practice and qualifying next week, more anon…