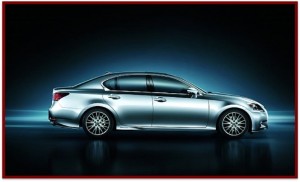 The new GS, introduced early in 2012, posted 47,787 global sales by the end of the year, almost six times the total that its predecessor sold in 2011.

Lexus revealed an expansion of its GS line with the unveiling of a new GS 300h sedan at the Shanghai Motor Show with a 2.5-liter four-cylinder engine and a hybrid drive system. The mid-size sedan will be sold in global markets including China, Europe, Asia, Australia, New Zealand and the UK. Lexus’s target of CO2 emissions below 110g/km will make the GS 300h one of the most efficient models in its class. The hybrid system is basically the sames as the Camry hybrid uses.

This hybrid system is based on an Atkinson cycle 3.5-liter V6 engine along with a compact, high-output, water-cooled permanent magnet electric motor powered by a nickel-metal hydride battery pack. The two powerplants drive the rear wheels both independently and in tandem, as needed. EPA fuel consumption is 29 mpg city, 34 mpg highway and 31 mpg combined. Zero-to-60 mph times are under five seconds helped by the instant torque available from an electric motor.  Moreover, it is certified as a Super-Ultra Low Emissions Vehicle (SULEV), which has lower emissions than the latest generation of diesels.