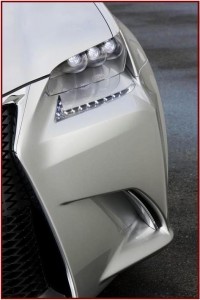 A sharply angular revision of the rounded Lexus GS is coming.

The LF-Gh, which stands for Lexus Future Grand Touring Hybrid, “sets out to redefine the premium grand touring sedan,” Lexus said in a statement.

LF-Gh is likely the replacement for the current and unsuccessful Lexus GS sedan, whose 1,100 unit sales year-to-date are off 35%.

“Through this exercise, the definition of L-Finesse, the marque’s design philosophy since 2001, has been refined and evolved to include a bolder, more distinct projection of what a luxury car could become in a modern world,” the release went on to claim. 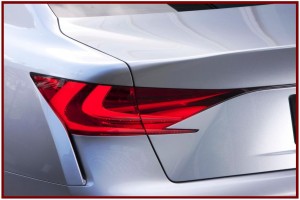 Expect the usual exaggerated wheels and tires, along with lots of hyperbole abut the LF-Gh.

The result is the LF-Gh concept, which conveys ideas that may migrate to future Lexus vehicles on a global scale.

The new LF-Gh concept will be on display in the Lexus exhibit at the New York International Auto Show from April 20 – May 1, 2011.