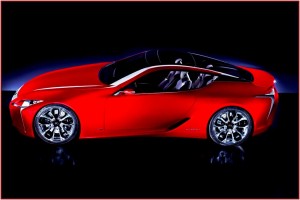 Judge for yourself whether this new Lexus design direction is “one step further,” than existing themes. Here’s the first official photograph of the Lexus LF-LC 2+2 sport coupe will be unveiled at the North American International Auto Show in Detroit next January. Conceived as a design exercise to explore the future of Lexus design, the LF-LC was created at the company’s Calty design studio in Newport Beach, California.

In November, the Lexus Division of Toyota reported total sales of 19,458 units, up 6.7% year-over-year, the best month since March, the month of the infamous tsunami. With Lexus attempting to regain it’s top selling luxury brand spot in the U.S. that it lost this year to the Germans post tsunami, look for LF-LC to appear sooner rather than later. 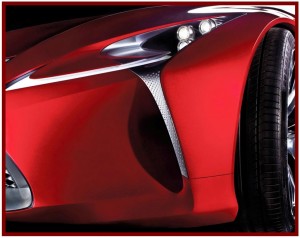 Lexus is displaced from its long-standing Number One Selling U.S. Luxury Brand this year by BMW, Mercedes and Audi because of production disruptions. The rematch is next year.

“Crafted from a clean sheet of paper at the request of Lexus headquarters in Japan, the LF-LC blends both high technology and organic shapes to connect the driver to the machine,” claims Mark Templin, Lexus group vice president and general manager. “The clean lines of the vehicle emphasize motion, creating a distinctive look for this futuristic sport coupe.”

See NAIAS – Acura, Lexus, Honda Will be Out in Force in Detroit