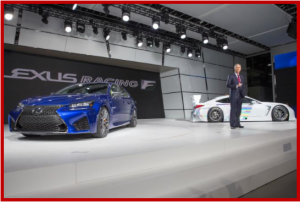 Lexus is in the midst of the most aggressive product launch and update cycle since the brand’s inception.

Lexus today unveiled the 2016 GS F performance sedan, the latest model in line as it continues to stalk Mercedes-Benz and BMW sport sedans that own and define the expensive segment. Sales of the GS F in global markets are to begin following its sales launch in Japan in the second half of this year.

GS F is the latest Lexus to join the high-performance F lineage that began in 2008 with the IS F sedan, then the LFA in 2012, and last year, the RC F coupe. Based on the mid-size GS luxury sedan, the GS F the 5-passenger, 467 horsepower car is designed to provide higher levels of performance.

A naturally aspirated, DOHC 32-valve 5.0-liter V8 produces 467 horsepower (473 PS) and peak torque of 389 lb.-ft. (527 Nm) at the 7300 rpm redline. The powerplant is attached to a quick-acting eight-speed automatic gearbox with paddle shifters for manual-shifting capabilities.

The GS F also has four different driving modes: Normal, Eco, Sport and Sport S+, the latter designed specifically for the racetrack or your favorite challenging road. IN a bit of greenwash, the DOHC 32-valve powerplant can slip into the Atkinson cycle in certain driving conditions to save some fuel.

The car has structural reinforcements and an exclusive suspension system matched to the added power. The firm suspension, along with wider forged wheels with staggered Michelin Pilot Super Sport tires (255/35-19 front, and 275/35-19 rear) promises to provide strong performance.

At the rear of the car, Lexus’ Torque Vectoring Differential (TVD) with two electro-mechanical clutch packs is part of the standard equipment: The TVD has three operating modes:

Ken Zino is an auto industry veteran with global experience in print, broadcast and electronic media. He has auto testing, marketing, public relations and communications expertise garnered while working in Asia, Europe and the U.S.
View all posts by Ken Zino →
This entry was posted in new vehicle, performance and tagged autoinformed, autoinformed.com, Ken Zino. Bookmark the permalink.