Lexus to Sell Third Generation IS Sport Sedan for 2014 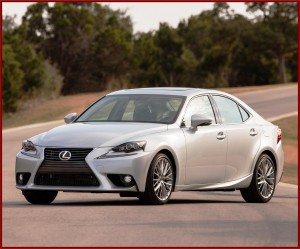 The most sophisticated and expensive Lexus IS to date will take on the Germans.

It is hard to say what will be more important to the actual buyers of the revised Lexus IS sedan that debuts in its third-generation guise this fall. Naturally, there is the new Lexus snout that is working its way through the lineup, or in marketing talk, a dynamic spindle grille. Moreover, the wheelbase is lengthened about three inches and width is increased by nearly half an inch, which will significantly increase rear seat room, a weakness of the current IS.

However, an industry first comes via free real time traffic and weather on all multi-media systems. This might be more enticing to the wired generation. The IS has two systems: a standard display audio system, or an optional navigation system. The nav system is operated by a multi-function display, which also allows adjustment of the climate, audio, and phone controls, among other driver distracting things.

Past the attempts to promote something as unique, the substantive sport sedan issue remains whether Lexus can continue to chip away at BMW’s dominance in the small sporty car class in the face of the impressive new 3-Series lineup and impending 4-series. (Read AutoInformed on BMW Shows a “Concept” 4-Series at NAIAS)

To do this, two IS models will be available for 2014. IS 250 is powered by a high strung 2.5-liter V6 engine rated at 204 horsepower at 6,400 rpm and 185 lb.-ft. torque at  a relatively high 4,800 rpm. This engine is matched to a six-speed electronically controlled transmission that has the now necessary sequential manual-shifting mode with rpm- matched downshifts in Sport mode.

For comparison consider that this spring the new BMW 320i will have and eight-speed automatic or a traditional 6-speed manual transmission. Moreover, its twin turbocharged 2-liter 4-cylinder is rated at  a maximum output of 180 horsepower at 5,000 rpm while, due to the twin-scroll turbocharging, the maximum torque of 200 lb.-ft. is developed from 1,250 rpm and remains constant up to 4,500 rpm. These numbers in theory translate a 0- to-60 mph elapsed time of 7.1 seconds, on the way to an electronically governed top speed of 130 mph. On paper at least, 320i will provide a better response than the IS.

IS 350 will be the expensive runner with its 3.5-liter V6 rated at 306 horsepower at 6,400 rpm and 277 lb.-ft. torque also at a peaky 4,800 rpm. The IS 350 finally has an eight-speed, Sport Direct Shift automatic transmission from the IS F high-performance model. This transmission has paddle shifters and computer controls that automatically select the optimum gear and downshift pattern in response to G forces of car. As with BMW, optional for both IS models is an electronically-controlled all-wheel drive system that is designed to help enhance traction and grip under all driving conditions by automatically varying front-to-rear torque balance from 50:50% to as much as 30:70%.

The optional F Sport package includes 18-inch wheels and firmer suspension tuning, as well as some different interior and exterior design cues. It is available for IS 250 and IS 350 RWD and AWD models. The Adaptive Variable Suspension used on IS 350 F Sport allows the driver to tune the F Sport’s ride characteristics with a choice of settings: Normal, for everyday, and Sport S or Sport S+ mode, for more body control and what is termed ‘agility.’ IS 350 models and IS 250 F Sport,now have an intake sound generator that is said to create a more sporting engine tone, a technology pioneered by the Germans and in widespread use.

Ten airbags are standard on the new Lexus. IS models, like many others, have computer controls, which integrate anti-lock braking, electronic brake-force distribution, traction control and vehicle stability control with the electronic power steering or on the IS 350 F Sport a variable gear ratio steering.

Lexus prices have not been announced, but the new rear-wheel-drive 320i due in May starts at $33,445 with destination; 320i xDrive (all-wheel-drive) starts at $35,445. Lexus is fighting a strong Japanese Yen and will face pricing pressure. And Lexus is fighting even stronger competitors now, so we will have to wait and see if Lexus chooses to keep under pricing the Germans, which was what originally made it successful against them.

Ken Zino is an auto industry veteran with global experience in print, broadcast and electronic media. He has auto testing, marketing, public relations and communications expertise garnered while working in Asia, Europe and the U.S.
View all posts by Ken Zino →
This entry was posted in auto news, new vehicle and tagged auto informed, autoinformed.com, automotive news, bmw 320i, IS 250, IS 350, Ken Zino. Bookmark the permalink.