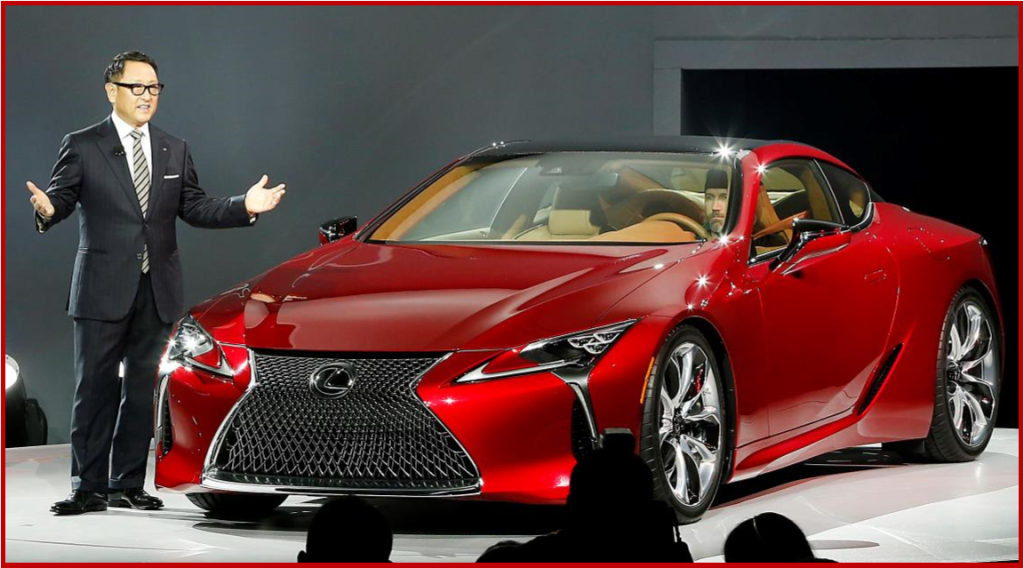 Akio Toyoda, CEO of Toyota, in 2013 said to the Lexus team that he wouldn’t introduce any boring cars during his tenure. Instead, he set about inspiring design and production groups to transform what was then the LF-LC 2 + 2 concept into a production vehicle.

“This couldn’t simply fill a category it had to fill people’s hearts. It must help improve the world we live in,” said Toyoda today as he introduced the production LC 500 to a media audience so large many people watched from televisions hastily set up in the display area.

LC 500 will have a 10-speed automatic transmission, rear-wheel drive and a zero-to-60 mph acceleration time of 4.5 seconds. The LC 500 is the first Lexus to use the brand’s all-new rear-wheel-drive platform, that is part of the new corporate global architecture for luxury vehicles (GA-L).

“This flagship luxury coupe has stunning portions, stunning design and performance make a strong statement about our brand’s emotional direction and will grow the Lexus luxury appeal globally,” said Toyoda.

Toyoda said LC 500 was based on a strong, appealing LF-LC design target. The engineering teams worked to find production solutions to maintain as much of the concept as possible.

Considerable management were employed to understand the engineering targets and collaborate with design viewpoints for solutions. Additional levels of prototype vehicle build also allowed both teams to refine key elements. For Lexus, the LC 500 project became much more than the development of a new coupe.

“The LC 500, with the shift in engineering processes and design ideologies it represents, symbolizes the beginning of a new phase for the Lexus brand,” Toyoda said.

Managers of Lexus assessed the success of engineering and design teams’ collaboration by how well they could transfer the LF-LC to a road vehicle. The new production model shares many of the key design elements, proportions and visual dynamism of the concept car that inspired it.

The LC 500’s bears Lexus signature aerodynamic shape. It has sensual curves, emotional forms, an available flowing carbon-fiber roof (glass roof standard), helping create a low, wide imposing stance that comes together for a highly functional, passionate package, according to Toyoda who races prototypes as well as markets them.

The LC 500’s front fascia bears Lexus’ large – some say overstated – grille, bordered by chrome on three sides and a new 3D mesh design. The “L”-shaped daytime running lights rest below triple LED headlamps. They were designed to include some of the industry’s thinnest projector lamps thereby enabling a low hood with a short front overhang. Functional venting also plays into the LC 500’s exterior design and improve aerodynamic stability and cooling.

The vehicle has a 113-inch wheelbase with short 36.2-inch front and 38.2-inch rear overhangs. Designers hoped to maintain a consistent tension in sheet metal through to the rear end that has slimly designed, multi-layered tail lamps with a lighting effect with a sequential L motif. A rear diffuser and optional active rear spoiler also help manage airflow during performance driving. It rides on machined cast aluminum 20-inch or available 21-inch forged aluminum wheels.

Inside LC 500, the driver’s hip point was engineered to be as close as possible to the vehicle’s center of gravity where feedback from the car is the most communicative to the driver.

Toyoda said he is taking a central role in Lexus global expansion by trying to raise levels of emotional styling and dynamic driving characteristics in such models as the NX, RC and IS. Lexus is aiming at the next generation of upscale consumers.