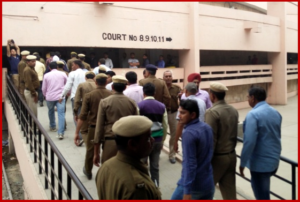 The Gurgaon district court in India has sentenced 13 union officials to life imprisonment. To express their dissent against the judgment, workers in six different Maruti Suzuki plants downed their tools for one hour this week.

The contentious case in India’s notoriously biased courts backed up by violent police forces that favor ownership and the rich, stems from a violent incident at Maruti Suzuki on 18 July 2012 that resulted in the death of a manager.

Subsequently, the company fired 546 permanent workers and 1,800 contract workers. Scores of workers were arrested and 139 workers were jailed for more than three and a half years, while eleven workers never got bail.

Four other workers were sentenced to five years in jail. Most of them have already been incarcerated for more than four years, while their families have suffered “indescribable hardship,” according to IndustriALL, a global labor rights organization.

A nominal fine was imposed. The remaining 14 workers are to be released immediately with a Rs 2,500 (US$38) fine, on the account of prior incarceration.

After the verdict, the workers’ lawyer, Vrinda Grover said, “the state prosecution astonishingly sought capital punishment for the convicted workers.” During the trial the defense lawyer argued that 117 workers were subjected to illegal and wrongful confinement at the behest of the company without any evidence, which the court upheld.

“We will be filing appeals against all convictions and are confident of securing justice in the superior court. There is no evidence to link these convicted 13 workers to the murder. It is important to remember that they were the leaders of the union; therefore, it is clear case of targeted framing by the state.”

IndustriALL maintains that the acquittal of 117 workers “clearly proves workers were falsely implicated in the case. Maruti Suzuki workers are paying the price for asserting their constitutional right to freedom of association. All this could have been avoided, had the management and the state administration handled workers’ demands in a mature manner. We hope that the workers’ appeal in the high court will deliver justice to workers.”