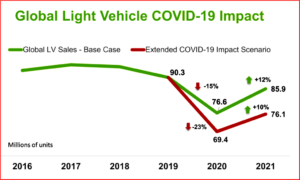 The data are ugly, and getting uglier as the virus spreads. Click to Enlarge.

The COVID-19 pandemic, LMC Automotive says will result in a decline in global Light Vehicle sales in 2020 nearly double that of the fall during the Great Recession (between years 2007 and 2009). All markets globally are now struggling from the COVID-19 impact. Worse, there remains significant risk as the situation is extremely dynamic. Further downward revisions in many markets are probable.

GDP growth prospects have turned negative in most countries, resulting in zero global GDP growth for 2020, down significantly from the LMC January forecast of 2.5% growth for the year.

Central to economic shock has been the vast lock-down of normal consumer and business activity in most major markets around the world.

LMC is also modeling a scenario in which COVID-19 impact continues well into H2 2020 or relapses in late Q3 and Q4. “If that were to take place, we would expect global Light Vehicle sales to decline more than 20%, with volume falling to 69 million units. Such a scenario would put 2021 and the longer-term recovery pattern at further risk,” says LMC.