Los Angeles had 3,111 Good Samaritan calls in 2011, more than 1,200 ahead of the next major city, Chicago according to telematics provider OnStar in a survey just released.

A Good Samaritan call occurs when an OnStar subscriber contacts an OnStar advisor to report another motorist’s situation requiring emergency assistance because of a vehicle collision, flat tire or response to an Amber Alert. 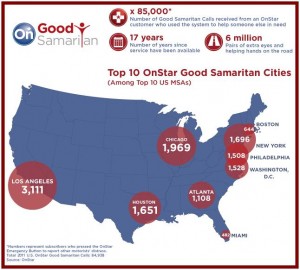 Good Samaritan Day goes back to the 1964 murder of Catherine Genovese who attacked as she was about to enter her apartment. She cried out for help but none of the passing bystanders helped. The outrage over this prompted March 13th to be declared Good Samaritan Involvement Day.

Using anonymous subscriber interaction data, OnStar found that of the 10 largest U.S. Metropolitan Statistical Areas, Los Angeles had 3,111 Good Samaritan calls in 2011, more than 1,200 ahead of the next major city, Chicago.

“We received thousands Good Samaritan calls nationwide last year showing that OnStar-equipped vehicles provide an added level of safety and security for drivers, passengers and others out on the road,” said Joanne Finnorn, vice president of Subscriber Services.