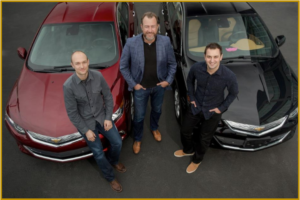 GM invested $500 million in Lyft to help it expand its ride sharing service. GM holds a seat on the company’s board of directors. The goal is development of a network of on-demand autonomous vehicles. GM is now the preferred supplier of  vehicles to Lyft drivers in the U.S.

Lyft and General Motors today announced the expansion of their Express Drive short-term vehicle access program to California and Colorado, including the all-new 2017 Chevrolet Bolt EV. By launching in San Francisco during this summer, and in Los Angeles by the fall of 2016, Express Drive’s California members will have access to vehicles from , arguably, the largest electric vehicle fleet in ride sharing, including the 2017 Chevrolet Bolt EV and the extended-range electric 2016 Chevrolet Volt.

Express Drive will also launch operations in Denver by the fall of 2016.  In San Francisco, Los Angeles and Denver combined, more than 130,000 people who applied to become Lyft drivers, but didn’t have qualifying cars will now have the opportunity to drive on the platform.

The expansion follows successful launches in Chicago, Boston, Washington D.C. and Baltimore. Since March, the Lyft exclusive program has grown.  About 30% of new Lyft driver applicants in Chicago have requested an Express Drive vehicle.  Boston’s program was fully subscribed in less than 4 days. GM claims that nearly $2 million were earned by Lyft drivers in the program to date.

Ken Zino is an auto industry veteran with global experience in print, broadcast and electronic media. He has auto testing, marketing, public relations and communications expertise garnered while working in Asia, Europe and the U.S.
View all posts by Ken Zino →
This entry was posted in transportation and tagged autoinformed, autoinformed.com, Ken Zino, lyft, ride sharing. Bookmark the permalink.