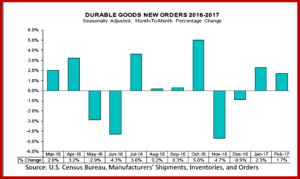 Economy continues to recover from Republican mauling over “deregulation” idiot-ology.

Durable goods long life products – washing machines or arguably vehicles – that last a longtime. As such they are used as leading indicators of consumer confidence or considered a predictor for recessions.

*Source: U.S. Census Bureau, Manufacturers’ Shipments, Inventories and Orders. Statistical significance is not measurable for this survey. The Manufacturers’ Shipments, Inventories, and Orders estimates are not based on a probability sample, so the sampling error of these estimates cannot be measured nor can the confidence intervals be computed. Data adjusted for seasonal variation but not for price changes.

Ken Zino is an auto industry veteran with global experience in print, broadcast and electronic media. He has auto testing, marketing, public relations and communications expertise garnered while working in Asia, Europe and the U.S.
View all posts by Ken Zino →
This entry was posted in economy, manufacturing and tagged autoinformed, autoinformed.com, census bureau, durable goods, inventories and orders, Ken Zino, manufacturers’ shipments. Bookmark the permalink.