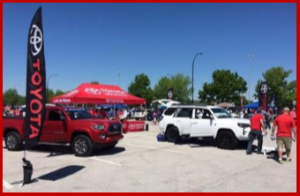 The Texas Rangers and Toyota today announced that the club and Japanese automaker have entered into a multi-year partnership where Toyota becomes the Official Truck Sponsor of the American league team.

It’s now only a question of time in Major Greed baseball before logos start appearing on uniforms as team owners pursue more and more revenue.

The multi-year Toyota deal extends through 2018 and provides Toyota with branding and naming rights for 12 of the Rangers’ parking lots adjacent to the ballpark in Arlington. In addition, Toyota receives outfield wall, video board, home plate, and LED signs, and becomes the exclusive sponsor of video replays at Globe Life Park in Arlington.

Toyota employees are also expected to support volunteer efforts of the Texas Rangers Baseball Foundation within the community.

To be fair, Toyota – as do many, many other companies, is only taking advantage of a marketing opportunity offered by Major Greed baseball. The question is when does hype and selling end?  We are dangerously close to not playing ball, but playing mall.

Ken Zino is an auto industry veteran with global experience in print, broadcast and electronic media. He has auto testing, marketing, public relations and communications expertise garnered while working in Asia, Europe and the U.S.
View all posts by Ken Zino →
This entry was posted in AutoInformed Editorial, marketing and tagged autoinformed.com, Ken Zino, mlb. Bookmark the permalink.