Marchionne Apologizes for Being Irreverent 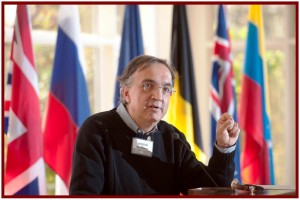 Is this a politically incorrect overdose, or a quip taken out of context, or a substantive issue?

Fiat CEO Sergio Marchionne has apologized to an organization called One Voice for his quip last January at the North American International Auto Show where he said Alfa Romeo models when re-introduced into North America should have Italian engines. Journalists present laughed it off as being typical of the straight talking executive who uses humor, including self-deprecating humor, to make his points.

The alleged slight in the pressure group’s point of view was how the irreverent Marchionne phrased the product development issue that was holding up Alfa Romeo’s return to the U.S. “I won’t put an American engine into that car. With all due respect to my American friends, it needs to be a wop engine,” Marchionne said.

One Voice president Dr. Manny Alfano via e-mails and letters claimed that ethnic slurs and “negative images are not funny and, in point of fact, extremely damaging to the Italian American community at large.” No indications of what damages actually occurred in this instance were provided.

Marchionne has now issued an apology to “anyone who may have been offended.”  (If you find someone, let AutoInformed know, please.) For the record Chrysler public relations was immediately responsive to our queries.

Ken Zino is an auto industry veteran with global experience in print, broadcast and electronic media. He has auto testing, marketing, public relations and communications expertise garnered while working in Asia, Europe and the U.S.
View all posts by Ken Zino →
This entry was posted in auto news, AutoInformed Editorial, people and tagged autoinformed, autoinformed.com, dago, fiat Chrysler, Ken Zino, marchionne, one voice. Bookmark the permalink.

1 Response to Marchionne Apologizes for Being Irreverent