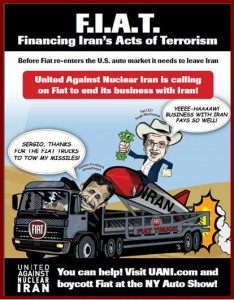 Why the U.S. government allows Volkswagen among other German companies to counter the goals of our foreign policy, while we are financing the defense of Germany is an open question.

Both Maserati and Lamborghini have ended business activities in Iran after the pressure group UANI protested their presence in the outlaw nation. This means that Fiat, Maserati’s owner, now joins the growing list of auto companies that have pulled out of Iran. Hyundai, Porsche, and Kia have also withdrawn from Iran during the past year.

The U.S. government is attempting to stop the continuing development of nuclear weapons in Iran, an effort that has apparently so far failed in spite of boycotts and a ban on oil imports from Iran to the European Union, among other sanctions. The U.S. is also against Iran’s sponsorship of terrorism, and Iran’s human rights record.

UANI’s campaign against Fiat began in 2011, and included advertisements in New York newspapers, and a protest at the New York International Auto Show. UANI also ran a public campaign in 2012 regarding entertainer Jennifer Lopez’s endorsements of Fiat, and produced an online video, “J.Lo’s ‘My World’ Fiat Commercial: Parody,” that generated more than 60,000 YouTube hits.

The auto industry represents 20% of Iran’s GDP that is dominated by the Islamic Revolutionary Guard Corps. UANI has developed model legislation, The DRIVE Act, to force auto manufacturers to choose between the interests of American foreign policy and the Iranian regime. The DRIVE Act requires automakers to certify they are not engaged in any business in Iran, or in the implementation of any agreement with Iranian entities in order to be eligible for U.S. government contracts or financial assistance.

European and Japanese automakers makers including Renault, Nissan, Peugeot, Volvo Group, Mazda, Isuzu and others continue to carry out extensive business and manufacturing agreements with Iranian government fronts or affiliates, such as IKCO, Saipa Group and Bahman Group.

In the view of critics, this is a perfect example of the hypocritically bad behavior of global corporations supporting terrorism and repression abroad in the pursuit of profits against the policies of their home governments, whose democratic laws protect them and provide for the well being their stockholders and their highly paid executives.

The United States and what was then called Persia established diplomatic relations in 1883. In the following years, Iran saw in 1906 the establishment of a limited constitutional monarchy, a 1953 coup against its democratically-elected prime minister (that was supported by the United States and the United Kingdom – how’s that for human rights abuses?), and a 1978 revolution against the country’s hereditary ruler, the shah. The U.S. broke diplomatic relations with Iran in 1980 after the seizure of the U.S. Embassy and 52 Americans by Iranian students. The U.S. Government currently does not have diplomatic or consular relations with Iran.