Massive Recall on Chevrolet Cruze for Fires Caused by Leaks 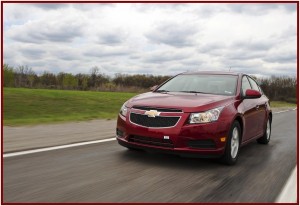 Built in the same plant as the late, unlamented Vega, Cruze is light years ahead of previous GM small cars but has also been plagued by quality problems.

Chevrolet is recalling more than 410,000 Cruze models because oil and fuel leaks can cause fires. Model year 2011 and 2012 Cruze compact sedans are affected by the safety defect. In required filings with NHTSA, GM said that it would modify the engine shield under the vehicle. This change will help prevent any liquids from being trapped in the engine compartment, where a fire could start and spread.

The GM safety action was prompted by customer complaints to NHTSA about smoke or fires in the engine compartment. It appears that careless oil changes are responsible for the oil leaks.

The National Highway Traffic Safety Administration opened a preliminary investigation in April of this year as a result of two engine compartment fires in 2011 model year Cruzes and later added the 2012 model year.

In a separate safety recall, GM will inspect more than 53,000 Cruze cars included in the first recall to assure all welds in the rear compartment were properly applied. Omitted or partially completed welds may affect the fuel tank straps where the secondary brackets attach to attach to the rear floor pan. An internal GM crash test revealed the possibility of fuel leaks.

GM in a statement said there are no known crashes, injuries or fatalities related to either recall. Only Cruzes built in Lordstown, Ohio, sold in the United States and Canada, and exported to Israel are affected.