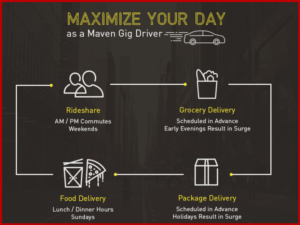 Maven Gig is expanding its initial offering in San Diego to now include San Francisco. The service will also launch in Los Angeles later this year. Maven Gig provides cars for independent driving firms such as GrubHub, Instacart, Roadie and ridesharing services.

By 2020, an estimated 43 % of the U.S. workforce will be made up of freelance workers. The nature of employment is changing, as corporations continue to shed middle class jobs. Maven Gig claims it is a “nimble platform that will grow and adapt with the shift.”

Maven Gig members can reserve a Chevrolet Bolt EV for $229 per week plus taxes, which includes insurance (minus deductibles), maintenance, unlimited miles and free charging at EVGo stations for a limited time.

“Freelancers in the sharing economy want flexibility and Maven Gig is a seamless way to maximize opportunities,” said Rachel Bhattacharya, director of Commercial Mobility Strategy for Maven. “If the driver has a lull on one service they can easily flip to another and keep hustling.”

Ken Zino is an auto industry veteran with global experience in print, broadcast and electronic media. He has auto testing, marketing, public relations and communications expertise garnered while working in Asia, Europe and the U.S.
View all posts by Ken Zino →
This entry was posted in economy, marketing, news analysis and tagged autoinformed, autoinformed.com, general motors, Ken Zino, Maven Gig. Bookmark the permalink.