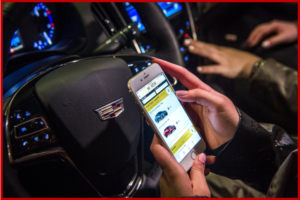 A fully connected fleet of GM vehicles has the newest cars that allows users to bring their digital lives into the vehicles with Apple CarPlay and Android Auto – contacts, favorites and maps.

Maven, General Motors’ personal mobility brand, is expanding its offerings in Atlanta from the Lyft Express Drive program to now include Maven City car sharing. More than 20,000 members have joined Maven and have traveled 57 million miles. The average Maven City trip is 121 miles and lasts more than 13 hours. The most popular vehicles are the Chevrolet Tahoe and Volt.

The growth is impressive and part of a growing trend that threatens the traditional auto industry business model.

Hourly rates start at $8 plus tax including gas and insurance. Unlike other local car-sharing services, Maven has no membership or application fees. Maven City members can choose a vehicle from a diverse fleet mix, that includes Chevrolet Cruze and Cruze Hatchback, Malibu, Tahoe and Volt; GMC Acadia and Yukon; and Cadillac ATS and Escalade.

Registered members can use the Maven app to reserve one of 50 vehicles at more than 20 locations throughout the city. The initial offering will focus on areas such as Ponce City Market, Midtown, West Midtown, Downtown, Old Fourth Ward, Virginia-Highland, East Atlanta Village and Inman Park.