May US Budget Deficit, Gulp, $424 Billion 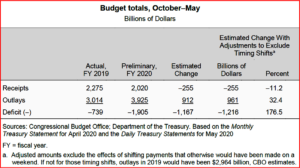 The federal budget deficit in May was $424 billion, about double the amount in the same month last year, the Congressional Budget Office estimates. That increase stems from the economic disruption caused by the 2020 corona virus pandemic and from the federal government’s tardy response to it, followed by Congressional panic actions of  four pieces of legislation: the Corona virus Preparedness and Response Supplemental Appropriations Act, the Families First Corona virus Response Act (FFCRA), the Coronavirus Aid, Relief, and Economic Security (CARES) Act, and the Paycheck Protection Program and Health Care Enhancement Act (PPPHCEA). (earlier Ten-Month US Budget Deficit Now at $867 billion. $Trillion Deficits Now Certain Under Current Economic Policies)

CBO claims that in 2019, some federal payments were shifted from June to May because June 1 fell on a weekend; no such shift occurred this June. If not for those shifts in the timing of payments, the deficit in May 2020 would have been $266 billion more than the deficit last May – still a breathtaking number that some or most of it will find it’s way into our national debt that will burden future generations.

A broader view is not encouraging. After the Trump tax cuts for wealthy people and corporations, the federal budget deficit was about $1.9 trillion in the first eight months of fiscal year 2020, CBO estimates, $1.2 trillion more than the deficit recorded during the same period last year. Revenues were 11% lower and outlays were 30% higher through May of this year than during the same eight-month period in fiscal year 2019. (If not for the timing shift that benefited May, outlays would have been 32% higher.)

Receipts Down by 25% in May

CBO estimates that receipts in May totaled $175 billion—$58 billion (or 25%) less than those in May 2019. Receipts fell for several reasons: declines in wages and in economic activity generally, recently enacted legislation, and actions by the Administration.

Estimated changes in May relative to last year:

Higher Spending in May Responding to the Pandemic

May 2020 was the first month that saw significant budgetary effects from PPPHCEA (enacted on April 24). In addition, spending stemming from earlier legislation, most notably the CARES Act (enacted on March 27), continued in May.

Revenues collected after the economic disruption began, notably collections in April and May, fell by 46% compared with the same period last year, largely because of declines in wages and in other economic activity, recently enacted legislation, and administrative actions. Among the most significant of those actions was the Administration’s delay of individual and corporate tax-filing and payment deadlines from April 15 until July 15.

CBO expects that much of the deferred revenue, including that resulting from administrative actions as well as recently enacted legislation, will be collected later this year; some is expected to be collected in future fiscal years.

However, because some individual taxpayers or businesses could become insolvent and fail to remit the future payments, the government might not collect all those deferred amounts.

Other changes, including changes attributable to the sharp decline in economic activity and to legislation (such as the deferral of and credits for certain payroll taxes), further reduced receipts beginning in April and will continue to do so through the rest of the fiscal year.

Major changes in revenues in April and May 2020, compared with the same two months in 2019, are linked to the pandemic and the government’s response to it:

Outlays for the first eight months of fiscal year 2020 were $3,925 billion, $912 billion higher than they were during the same period last year, CBO estimates. If not for the shift in the timing of certain payments last year, that year-to-year increase would be larger—$961 billion, or 32%.

Outlays in fiscal year 2020 can be divided into spending before the government’s pandemic response (October 2019 through March 2020) and after the response began (April and May 2020).

October Through March. From October through March, outlays were $2,347 billion—$149 billion (or 7%) higher than they were during the same period last year. The increase stemmed primarily from the following:

April and May: Outlays in April and May 2020 were nearly twice what they were in the same two months last year—increasing by $763 billion. Large increases are linked to the pandemic and the federal government’s response to it:

The Treasury Department reported a deficit of $738 billion for April—$1 billion higher than CBO estimated last month, on the basis of the Daily Treasury Statements, in the Monthly Budget Review for April 2020.

1 Response to May US Budget Deficit, Gulp, $424 Billion