Posted on 4 December 2012 by Kenneth Zino 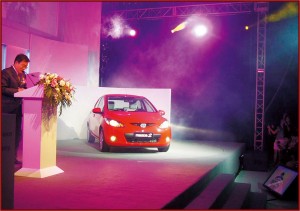 Mazda’s car sales reached 169,814 units in the first eleven months in China, down 11% from the previous year.

Continuing its separation and divorce from Ford Motor Company, Mazda Motor Corporation has announced a new Chinese joint-venture, Changan Mazda, based in Nanjing. The 50:50 corporation with all regulatory approvals is now responsible for all of CFMA’s Mazda-related business, including development, manufacturing, marketing and sales of Mazda-branded vehicles in China.

Mazda and Changan will establish a research and development center in Nanjing, a city infamous as the location of a World War II atrocities by Japanese troops. Recently, the sales of Japanese brand cars in China slumped after anti-Japanese demonstrations over a territorial island dispute in the East China Sea was allowed by the communist party.

Mazda Motor sold 12,187 new cars in China in November, a 30% drop year on year. Mazda’s car sales reached 169,814 units in the first eleven months in China, down 11% from the previous year, according to a statement.

Ford Motor Company, which dumped virtually all of its stock in Mazda along with its controlling interest back in 2008, will continue in Chongqing with Changan Ford Automobile. Chongqing is the original factory town of Ford China and now contains a sprawling manufacturing center with numerous plants.

What was then called Changan Ford Mazda Automobile (CFMA) broke ground last August for a third assembly plant, Chongqing 3, in China, which will now be part of Changan Ford. The $600 million expansion will make Chongqing the largest Ford production site in the world by far – a latter day Rouge for communist customers. Chongqing 3 includes a new assembly line, body and paint shop. The first vehicle is expected to come off the flexible assembly line in late 2014. CFMA already operates two assembly plants and an engine plant in Chongqing, with another engine plant and a transmission plant currently under construction. At the time, CFMA has also signed a letter of intent with the Municipality of Chongqing to explore expanding its research and engineering capability in Chongqing.

China is the world’s largest auto market since 2009. Mazda said the successful partnership forged over the years with Ford would continue at a “strategic level.”