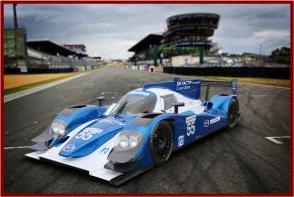 Dempsey and co-driver Joe Foster are currently testing their LM P2 car in Virginia as the rest of the sports car world focuses on the 80th running of the 24 Hours of Le Mans this weekend.

As the 24-hour endurance race at Le Mans got underway today, Mazda Motorsports announced that it would sell racing versions of its new diesel engines to teams competing at Le Mans.

Dempsey Racing, co-owned by actor – and racer – Patrick Dempsey, will campaign a LM P2 at the 2013 running of the French classic. The engines will be stock-block Mazda Skyactiv-d 2.2-liter diesel four-cylinder, dual-stage turbocharged powerplants. Mazda is the only Asian manufacturer to score an overall win at the race, in 1991 with a rotary engine.

The latest Mazda racing announcement follows one made earlier in the month at the Indy Car race in Detroit, that it would supply engines to customer teams competing in Grand-Am’s new GX Class for advanced/clean technologies, beginning with the 2013 season. No other automaker has thus far publicly committed to that series, but it would seem a natural for German companies, specifically Volkswagen, which sells a many diesel engine cars in the U.S., or Audi, which has a history of racing diesel cars. Audi dominated Le Mans for a decade and is the favorite to win the 2012 race now underway, although in the early hours, two Toyota TS030 hybrids were competitive.

“This reopens our love affair with Le Mans,” said Jay Amestoy, Vice President of Mazda Motorsports. “We’ll do it in current Mazda style, with engines being available for sale to European and U.S. customers competing in the LMP2 class for both the World Endurance Championship (WEC) and the American Le Mans Series (ALMS).”

Dempsey Racing has been racing Mazda RX-8s in the Grand-Am GT class since 2007 with a podium finish at the 2011 Rolex 24 at Daytona.  Dempsey helped Mazda win the 2010 Grand-Am GT Manufacturers Championship. Dempsey Racing expanded this year to include a team running in the American Le Mans Series, and now competes in both the Prototype Challenge (LM PC) and Prototype 2 (LM P2) classes as they prepare for a Le Mans effort.

In fact, both team owner Dempsey and co-driver Joe Foster are currently testing their LMP2 car in Virginia as the rest of the sports car world focuses on the 80th running of the 24 Hours of Le Mans this weekend.

The production Mazda Skyactiv-d technologies include:

Compared to Mazda’s current-production 2.2L MZR-CD diesel engine the new one has: