Mazda to Race Diesel Engines in U.S. Grand Am GX 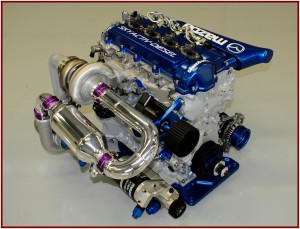 The racing effort also begs the question when and where a Mazda Skyactiv-d production engine will appear in the United States.

Mazda Motorsports will supply racing versions of its new Skyactiv-d diesel engines to customer teams competing in Grand-Am’s new GX Class for advanced/clean technologies, beginning with the 2013 season. No other automaker has thus far publicly committed to the series, but it would seem a natural for German companies, specifically Volkswagen, which sells a many diesel engine cars in the U.S., or Audi, which has a history of racing diesel cars.

The engines will be stock-block Skyactiv-d 2.2-liter diesel four-cylinder, dual-stage turbocharged powerplants that, according to John Doonan, MNAO’s Director of Mazda Motorsports, “will deliver outstanding performance and fuel economy coupled with the kind of quality, durability and reliability needed to produce great street cars and win endurance races.”

Testing begins later this year, and while no car has yet been named, a good bet is the upcoming replacement for the rotary engine powered RX-8 or whatever will become the zoom-zoom brand’s performance flagship. 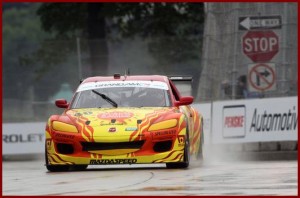 This is a marketing move to align racing with the promotion and sale of production Mazdas.

Currently in the GT class, the RX-8 is fourth in the standings, mixing it up successfully on tracks against Ferrari, Porsche and Chevrolet. In 2008 and 2010, Mazda had GT-class wins by the SpeedSource RX-8 in the Rolex 24 at Daytona.  Mazda is also the only Japanese car company with an overall win at the 24 Hours of Le Mans, a record that is under attack this year by a serious two hybrid car effort in the unlimited class by Toyota. Over the weekend, Mazda finished second in the Grand Am in Detroit where racing has returned once again to Belle Isle.

With the RX-8 no longer in production for the U.S. market, Mazda is moving to bolster its marketing efforts by combining racing with a car that will be on sale here. The racing effort also begs the question when and where a Mazda Skyactiv-d production engine will appear in the United States. No Japanese automaker is currently selling a diesel in the U.S. – a possible area Mazda could exploit, building on its fuel-saving technologies.

The production Skyactiv-d technologies include:

Compared to Mazda’s current-production 2.2L MZR-CD diesel engine the new one has: