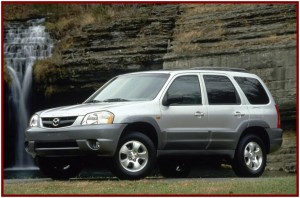 Mazda and Ford dealers will replace the Continental-supplied master cylinder reservoir cap and the ABS electrical system will be modified.

Mazda is recalling more than 50,000 2001-2002 Mazda Tribute SUVs because the master cylinder cap can leak brake fluid, corrode an underhood ABS wiring connector and possibly start a fire. The recall follows one announced by Ford two weeks ago for the same safety defect on Escape SUVs, which mechanically are the same as Mazda Tributes. Like Ford, Mazda said it will tell owners to park their vehicles outside until parts are ready. And also like Ford, Mazda is only recalling soem of the vehicles potentially affected.

In April of 2007 Ford and Mazda had recalled connectors used on the Escape and Tribute antilock braking system for improper seals and smoking connections that covered model years from 2001 up to 2004. This previous recall was apparently not properly performed, according to Ford filings with NHTSA. The fire problem continued with the National Highway Traffic Safety Administration keeping the investigation open and monitoring new complaints. Ultimately it appears that NHTSA has now forced the latest partial recall to correct the botched earlier one, but whether this smaller recall covers all of the problem vehicles remains to be demonstrated by data.

Mazda and Ford dealers will replace the Continental-supplied master cylinder reservoir cap and the ABS electrical system will be modified. Owners may contact Mazda at 1-248-393-5990 about safety recall 6712A. Owners may contact the Ford at 1-866-436-7332 about 11S24. This recall is related to the previous 07V-156 NHTSA recall. Owners can also contact NHTSA’s Vehicle Safety Hotline at 1-888-327-4236 or http://www.safercar.gov.

This ongoing recall is similar to an earlier Ford fire recall, which is the longest running safety recall in NHTSA history.  A defective Texas Instruments speed control deactivation switch (SCDS) may leak, overheat, smoke, and/or burn. Ford engineers did not put a fuse in the circuit, contrary to common industry practice, meaning that full battery amperage was applied when the TI module failed, which then caused the unexpected fires.

Critics maintain that Ford was reluctant to deal with the problem due to the large number of vehicles involved. All told, Ford has now recalled more than 14,000,000 vehicles for that fire problem in the U.S. alone, a record for any single safety defect. Ford Canada also recalled at least 500,000 vehicles for the same fire problem, making it the largest recall in Ford Canada’s history.