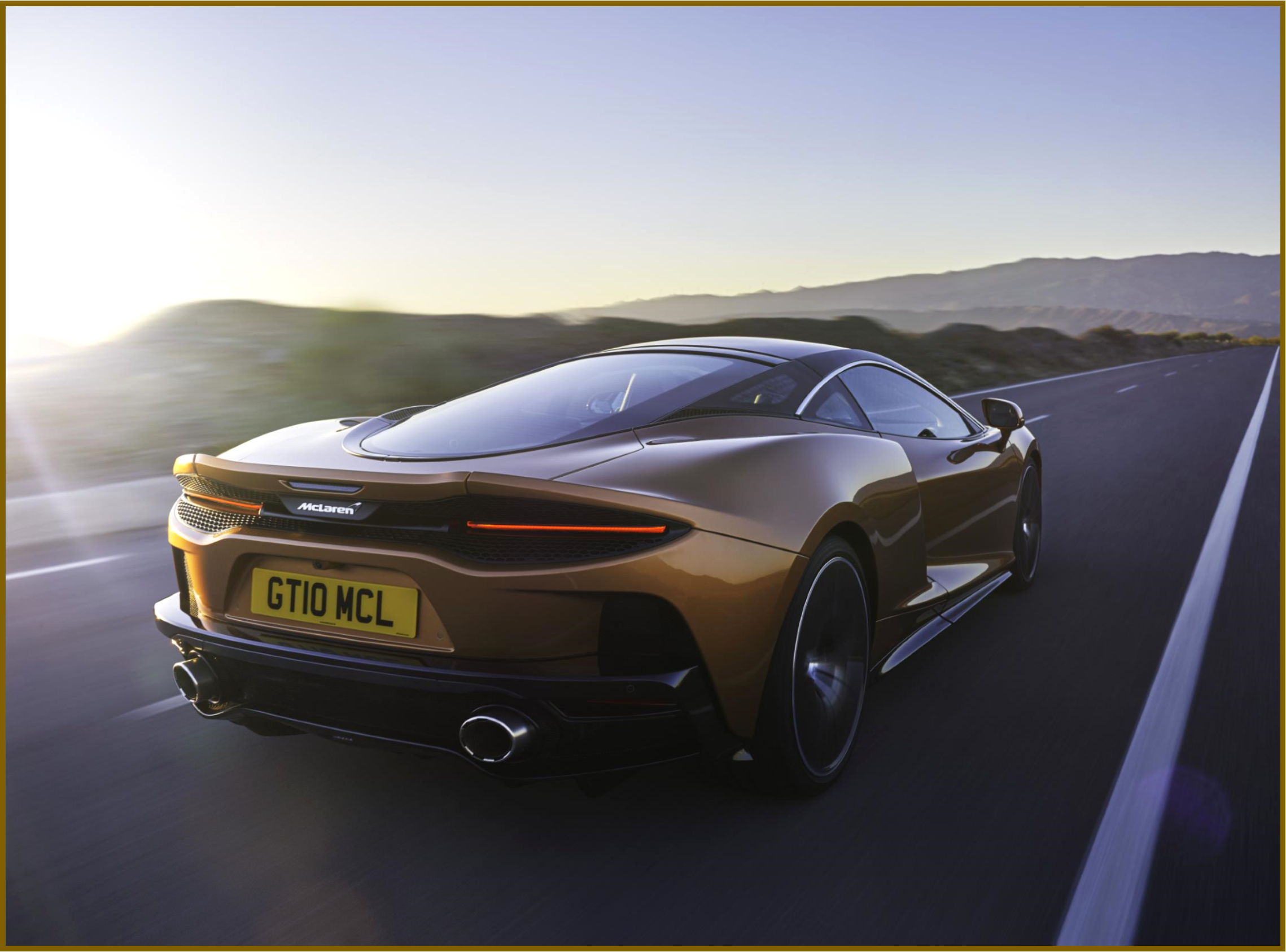 McLaren Automotive today showed its interpretation of a modern Grand Tourer: the new McLaren GT. The GT is said to challenge the conventions – whatever they are in this rare, exotic sub-species – of the Grand Tourer category with a “blend of beautiful design, high-quality innovative materials, true supercar performance and McLaren driving dynamics and engagement.” Not bad for a non-econobox hatchback.

Positioned alongside the existing Sports, Super and Ultimate Series families, this McLaren is for a new audience – it’s hoped – providing an “alternative to existing products in an expanding market segment.”

In the spirit of Grand Touring – long-distance driving in relative comfort, at higher speeds and with room for luggage – McLaren boasts, not without some justification, it has redefined modern GT ownership with a car that is lighter, faster and more engaging than existing products in the segment, with greater space, comfort and usability.

Like all McLarens, the new GT has a carbon fiber structure that has strength and rigidity while enabling utmost driving dynamics and lightest-in-class curb weight. At 1,530kg (DIN), the McLaren GT is more than 130kg lighter than its closest core competitor and hundreds of kilograms less than other cars in the segment. (Um, let’s guess – would that be Aston-Martin, Ferrari Mercedes-Benz or Porsche in the If You Have to Ask You Can’t… It Class?) With 620PS from its 4.0-litre, twin-turbocharged V8 engine, the power-to-weight McLaren GT is a remarkable 405PS-per-tonne. 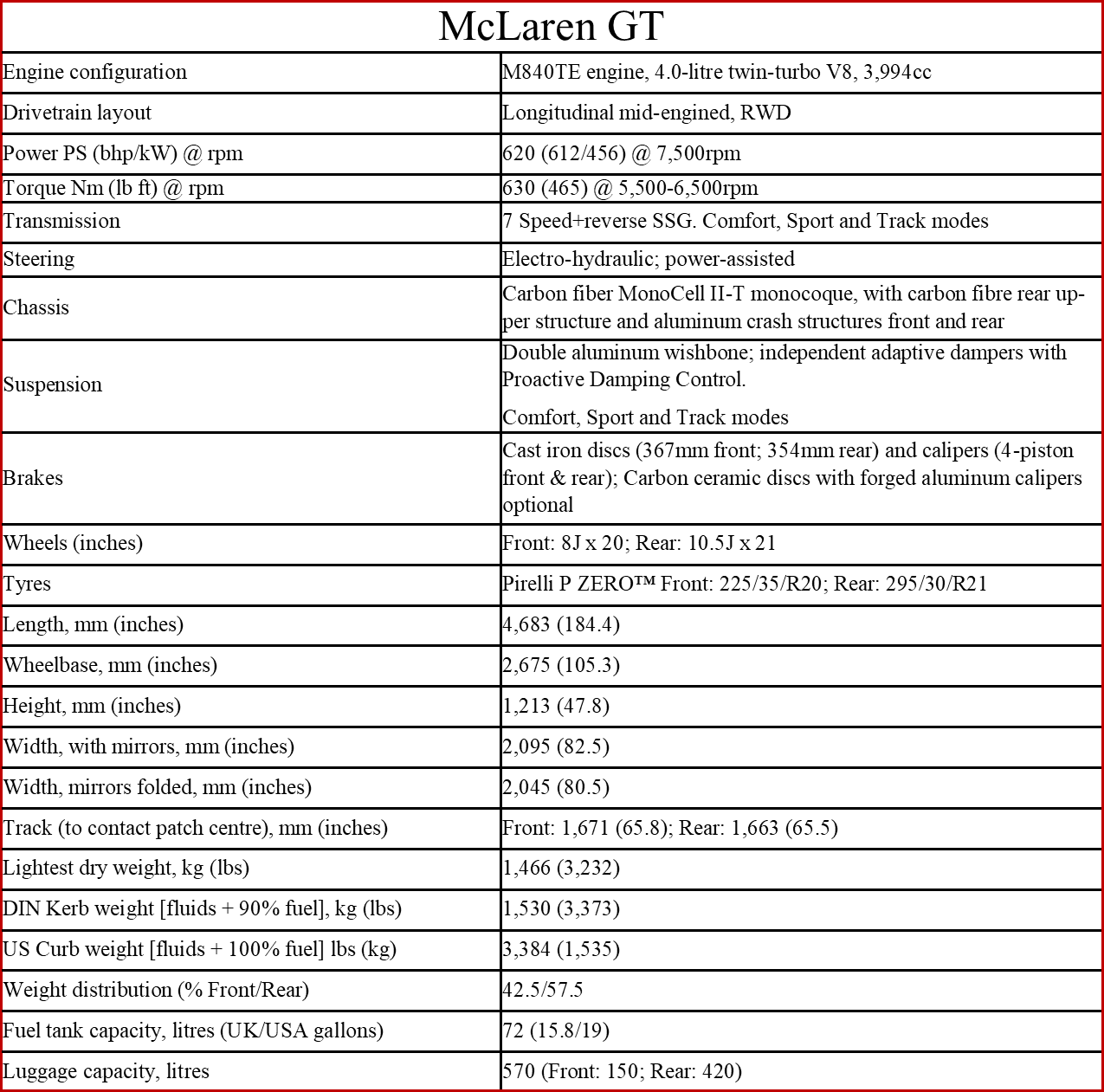 The source of that racecar like performance is a new, 620PS 4.0-litre, twin-turbocharged engine, designated M840TE. Further expanding the family of McLaren V8 engines, it is unique to the new McLaren GT with the immense power and torque and superior exhaust sound that are the hallmarks of a true Grand Tourer.

Torque of 630Nm is produced between 5,500rpm and 6,500rpm, with more than 95% of this available from 3,000rpm to 7,250rpm. The new engine is mated to a 7-speed SSG transmission to deliver linear, seamless and relentless acceleration.

The suspension, steering and brakes are all unique to the car and honed to provide inherent balance, responsiveness and precision yet better ride comfort than any other McLaren.

The suspension is a lightweight aluminum, double wishbone design, paired in the new McLaren GT with hydraulic dampers to deliver Proactive Damping Control. Governed by the most sophisticated iteration yet of the pioneering Optimal Control Theory software algorithm developed for the 720S, the suspension uses inputs from sensors to ‘read’ the road, interpreting what will likely happen next and reacting predictively in just two milliseconds.

Overall, body movement is tailored for occupant comfort; vertical load and contact patch variation are optimized to enhance grip levels, but each of the three active dynamics handling modes – Comfort, Sport and Track – has its own distinct set of parameters to reflect the selected preference, for example, a particularly compliant ride in Comfort mode.

Driving precision and enjoyment is further enhanced in new McLaren GT by hydraulic steering, which uses a single software ‘map’ across Comfort, Sport and Track modes to deliver optimal feel and response. Reflecting the requirements of the new McLaren GT, it also provides increased assistance at low speeds to aid urban driving and parking, without loss of rewarding feedback at higher speeds.

McLaren and its technical partner, Pirelli, have developed a new P ZERO tire that it’s said meets the demands of high-performance driving and comfort and refinement in equal measure. The 21-inch alloy rear wheels, which are the largest ever fitted to a McLaren, are paired with 20-inch at the front and available in 7- or 15-spoke wheel designs.

The high-performance braking system has also been designed to deliver across the full range of requirements, from precise pedal feel and hard deceleration when driving at higher speeds to usability and comfort at lower speeds or when holding the vehicle in traffic, where less pedal effort is preferable.

The unique MonoCell II-T monocoque – the T denoting ‘Touring’ – incorporates a carbon fiber rear upper structure that adds some weight but allows the creation of a 420-liter luggage area below the front-hinged, full-length glazed tailgate. The tailgate has a soft-close function as standard and can be optioned as electrically powered.

The low height of the engine and positioning of the exhaust system allows the volume, shape and usability of the luggage bay to hold a golf bag or two pairs of 185cm skis and boots, as well as luggage.  An additional 150 liters of storage at the front means the new McLaren GT can accommodate a total of 570 liters.

The strength of the carbon fiber core structure means that glazed C-pillars and rear-quarter windows can be incorporated into the design, enhancing rearward vision and bringing still more light into an a “spacious and uncluttered cabin.” Dihedral doors swing upwards to expose a wide opening and low sill.

The interior is “a cosseting space designed to delight on longer journeys, but with all the essentials for focused, high performance driving; the seating position, location of controls and forward visibility are as important here as they are in any McLaren.” The electrically adjusted and heated seats, unique to the McLaren GT, have been engineered to meet the requirements of Grand Touring, being optimized for long-distance comfort, with the “perfect” amount of padding and shoulder and back support in combination with excellent lateral control.

Technology and modern craftsmanship, arguably, share equal prominence in the new GT, with the finest high-quality materials complemented by features such as the most sophisticated McLaren infotainment system to date; hidden-until-lit ambient lighting and the option of an electrochromic glazed panel in lieu of the standard carbon fiber composite gloss black roof, darkening or lightening at the touch of a button.

The Nappa leather trim standard features can be upgraded to soft grain luxury leather or Alcantara, depending on which vehicle model is chosen. Cashmere will become available as an additional choice towards the end of 2019 – the first time that this material has been used in a production vehicle.

Super Fabric trim for the rear luggage bay is another option, the innovative woven fabric that is infused with a layer of tiny armored guard plates, providing increased resistance to stains, cuts, nicks and abrasions, as well as being breathable, easy to clean and quick to dry.

The infotainment system developed for the new McLaren GT is among the fastest-operating in any car, it also features industry-standard HERE® navigation mapping and real-time traffic information. The driver interface operates in a similar way to a smartphone and the seven-inch central touchscreen is used to select from vehicle functions such as satellite navigation, Bluetooth telephone, media streaming and voice activation. DAB digital radio (or Sirius satellite radio in North America) is standard.

Heating and ventilation controls are also incorporated into the touchscreen, ensuring ease of use and reducing the overall number of switches and controls. Dual-zone climate control and air conditioning are standard, with the system allowing fully automatic and independent settings for both the driver and passenger.

Ahead of the driver and providing key vehicle information is a 12.3” TFT screen. The instrument graphics are like those seen on aircraft, delivering clear, crisp displays that are easy to read. In addition to vehicle speed, gear selection and engine revs, the instrument cluster can also display turn-by-turn navigation, phone calls, chosen audio output and tire temperatures and pressures. When a reversing camera has been specified, the image behind the vehicle is displayed when reverse gear is selected, which keeps the driver’s eyeline as high as

Refinement was a priority for the new McLaren GT from the outset. Unique engine mounts that are half the stiffness of those in the track-focused McLaren 600LT help to minimize structure-borne noise, while low-frequency sounds emitting from the carbon fiber structure are reduced rather than amplified into the cabin in the way that they are in the McLaren Senna; in Comfort mode, the new McLaren GT is the most refined McLaren ever.

At almost 4.7m, the new McLaren is longer than any of the cars in the McLaren Sports or Super Series. The front and rear overhangs extend further than is traditional for McLaren, but the 10-degree approach angle at the front (13-degree with vehicle lift engaged) means the new McLaren GT can cope with the most aggressive traffic calming measures, aka sleeping policemen and the war zone of American roads. In combination with underbody clearance of 110mm (130mm with vehicle lift) this ensures the car is eminently usable in all urban situations; not only is it competitive with all rivals, but in ‘lift’ mode it is the equal of mainstream sedans.

The new McLaren GT is available to order now from McLaren retailers worldwide, with customer deliveries commencing towards the end of 2019. UK pricing starts at £163,000 including taxes.

Further information about the new McLaren GT, including detail of the different levels of specification, the range of colors and interior trim choices and the options available – including components developed by McLaren Special Operations – can be found here: cars.mclaren.com/new-mclaren-gt.