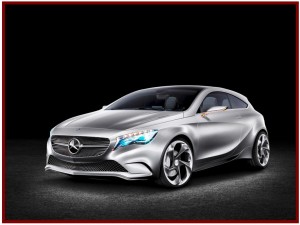 Concept A-Class has a combination of defined edges protruding from body surfaces first shown on the Mercedes-Benz F800 Style.

A Mercedes-Benz A-class concept car will debut at the 2011 New York Auto Show and Shanghai Auto Show later this month. The baby Benz, first introduced in 1997 and revised in 2008, was an extreme downsizing with its 151 inches of overall length. Such a small car and its revised successor in 2008 were deemed too tiny for the North American market, but ultimately millions of A-class models were  sold globally.

The first A-class became infamous for its failing the so-called “Moose Test,” an extreme avoidance maneuver conducted by a Swedish magazine, which resulted in its rolling over. After initially stonewalling and denying there was a problem, Mercedes recalled the cars and fitted an electronic stability control system, variants of which continue as standard equipment to this day.

The release of these A-class photos and confirmation that it will be shown in New York is the result of increasingly stringent U.S. fuel economy laws and possibly a pending shift in buyer preferences. This will make the car available in the United States for the first time. The highest fuel economy model that Mercedes sells in the U.S. now is a C-class that has EPA combined fuel economy of 21 mpg, about half of what will be required on average for cars by 2016.

Mercedes-Benz, which blithely violated U.S. fuel economy standards and whose affluent customers then paid millions of dollars in gas guzzler fines instead, now appears to be changing its philosophy and pursuing the Corporate Average Fuel Economy (CAFE) credits that the sale of high mileage small cars bring. Whether this strategy will be supported by actual Benz buyers remains to be seen, and is a matter of much debate among industry observers.

Outside the A-class concept is working many of the angular themes already available on more subdued production cars such as the Ford Fiesta.

Technical details include a new turbocharged four-cylinder gasoline engine, a dual clutch transmission and a radar-based collision warning system with adaptive Brake Assist. Presumably this means that a diesel engine version will not come to the U.S. because of its tougher emission standards for oil burners.

The Concept A-class has long hood, low silhouette and slim side windows – the exact opposite of current models, which means it will be tough to park, have large blind spots and be expensive to repair – if the exaggerated styling carries over into production, which is unlikely.

The front-wheel-drive model is powered by a four-cylinder gasoline engine from the new M270 series. It was designed for transverse installation, has direct injection and turbocharging. The Concept A-class is equipped with the 2-liter variant of the new engine, developing 210 horsepower. This engine is linked to a new Mercedes-Benz dual-clutch transmission.

In what’s claimed will be a world first in the sub-compact class, the concept car has a radar-based collision warning system with adaptive Brake Assist, which lowers the risk of rear-end collisions. This assistance system gives a visual and acoustic warnings to an inattentive driver and prepares Brake Assist for a maximum braking response. Braking is initiated as soon as the driver forcefully operates the brake pedal. 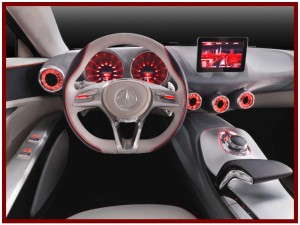 The dashboard has a translucent, stretchable fabric lining, allowing the structure underneath to remain visible. The chances of this making it past crash standards for production cars would appear to be, well,  nil.

Inside the dashboard has a translucent, stretchable fabric lining, allowing the structure to remain visible. The chances of this making it by production crash standards would appear to be nil. The shape of the air vents in the dashboard is said to be suggestive of a jet aircraft, themes that General Motors worked in the middle part of the last century. The large dials in the instrument cluster are in red, and the shift lever is designed as a “reverse thrust control,” in the tortuous styling babble of the bloviating release.

As is the case in virtually all vehicles going forward, a phone is integrated into the Concept A-class to enable distracted driving. All functions are shown in the display as applications, and can be operated using a rotary/push control.