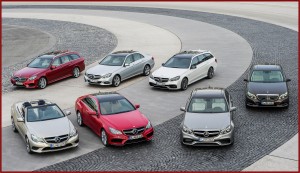 Mercedes-Benz proved how competitive the U.S. luxury car segment is at NAIAS by showing a new E-Class, as well as a new four-door CLA-Class. It’s a worrisome development for Cadillac, and even a worse challenge for Lincoln as it strives to stay alive and forge a new identity with only what are re-badged Ford vehicles.

The crown jewel of the Mercedes brand, the E-Class consists of sedan, wagon, coupe and convertible versions, along with the new E 63 AMG. These five new models from Stuttgart are the first of many that will appear in the U.S. this year, the largest single market for Mercedes, culminating in a new flagship S-class.

The front of the E was revised with all-new headlights. For the first time, the E is offered with two different front ends – the standard version three-louver look mit star on the hood, or an incorporated sports-car radiator with a large central tri-star.

“In 2012, we sold more than 274,000 cars in the U.S. and thus achieved a new sales record for Mercedes-Benz. Because we are bringing so many new models to market in 2013 – the new E-Class line, the new CLA-Class and the new S-Class – we anticipate that sales will again increase in 2013,” said Dr. Dieter Zetsche, Chairman of the Board of Management of Daimler AG and Head of Mercedes Cars.

Among the powertrain highlights are new four-cylinder gasoline engines with spray-guided direct injection. This line of “BlueDirect” engines are said to put the new E-Class among the highest-ranked cars in terms of fuel economy (and into the ‘A’ category of the European efficiency classification). The complicated selection of engines is comprised of six gasoline and diesel versions.

At the opposite end of the efficiency and “socially responsible” scale, the E 63 AMG now has an S-model with maximum power of 430 kW (585 hp) and  800 Nm of torque, along with a newly-developed, performance-oriented AMG  all-wheel drive system. This permanent all-wheel drive is available as an option on the other E 63 AMG models. 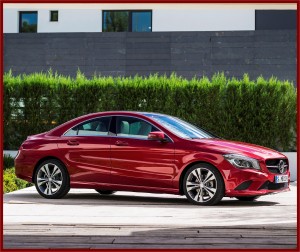 The CLA250 and CLA250 awd have a 2.0-liter four-cylinder gasoline engine rated at 08 horsepower and 258 lb-ft of torque. There is a standard stop-start function, and the engine  is mated to a 7-speed auto transmission.

As a four-door coupe with frameless doors, the new CLA copies the successful luxury-class CLS. Adding to the “sporty positioning, CLA comes with high-torque four-cylinder turbo engines with output of up to 155 kW (211 hp) and all-wheel drive.  The CLA 180 “BlueEfficiency Edition,” has a drag coefficient of 0.22 that it is claimed sets a world record for production cars. Again, electronic support systems for distracted drivers are included to prevent collisions and detect driver drowsiness detection.

With a Cd figure of 0.23, the CLA sets a new benchmark among not only Mercedes models, but also all production vehicles. The frontal surface area, Cd x A – which is crucial to aerodynamic resistance – also leads the field at 5.49 sq. ft.

The excellent handling of air flow by the car, which will have a major impact on fuel consumption under everyday driving conditions, are the result of extensive aerodynamic optimization. These include a low A-pillar shoulder with adapted A-pillar geometry, aerodynamically optimized exterior mirrors, low-drag wheel trims and serrated wheel spoilers on the front and rear wheel arches. Extensive underbody cladding, additional cladding at the center of the rear axle, an aerodynamically optimized muffler and a diffuser improve the flow of air beneath the CLA..

Mercedes-Benz said that not only is the new CLA its most recent automobile, but its first appearance in the United States coincides with a historic event: the 125th Anniversary of Daimler in the United States. The foundation for the company’s continued success to date was established between Gottlieb Daimler and the noted piano manufacturer William Steinway, for it was in 1888 that the men signed a contract forming the “Daimler Motor Company” based on Long Island, New York.