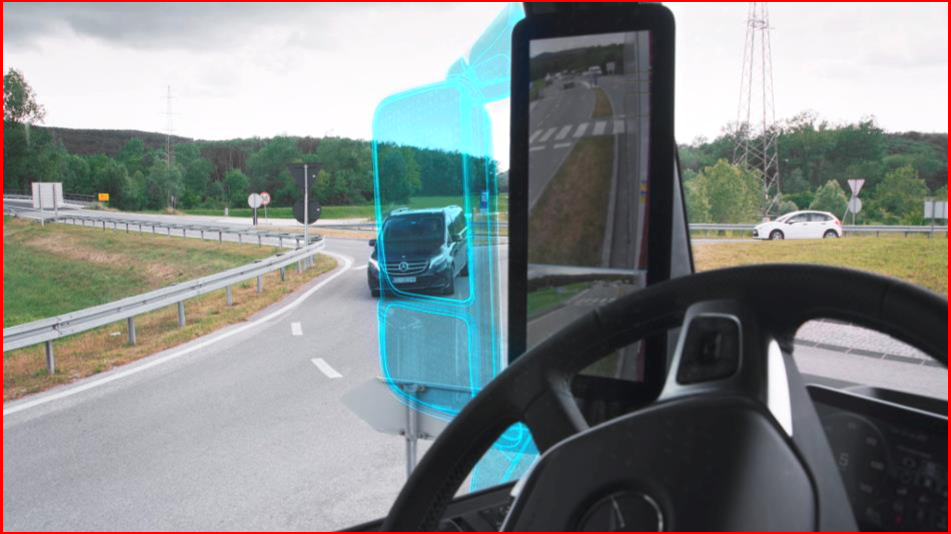 Mercedes-Benz Actros with MirrorCam. By eliminating the classic mirror, full view through the side window is seen. The marked area illustrates the visual gain.

The new Mercedes-Benz Actros eliminates the classic mirror, so a full view through the side window is seen. This is made possible by the so-called MirrorCam system used in place of rearview and wide-angle mirrors that previously covered large areas to the right and left of the A-pillar.  the optimized wind resistance of MirrorCam can result in up to 1.5% less fuel burn.

The advantage is prominent at turns and junctions, when maneuvering and in tight bends. The driver must no longer look as far to the right or left to see traffic to the rear. Mirrors are mounted in a fixed position so that when cornering the driver may lose sight of the end of the semitrailer. In contrast, the MirrorCam swivels the image of the camera mounted toward the inside of the turn, so that the driver always has the end of the trailer in view.

In practice, the system is set for standard semitrailers, but swiveling can be regulated individually. This happens on modern trailers automatically when they transmit their geometric data to the towing vehicle. The driver can move the swivel radius manually in the door operating unit using the side selection button and ta four-way rocker switch.

Because of the position of the cameras high up on the vehicle, the small roof above the camera lens, a special coating and the digital transmission of the image to a display in the cab, misting and dirt barely affect the system at all. particularly helpful on cold, damp days – the camera is automatically heated at temperatures below 15 degrees Celsius.

The distance indicator lines which are shown on the display of the MirrorCam system help drivers to estimate the distances behind the truck. Three fixed lines are shown together with a line that the driver can adjust precisely to mark the end of the vehicle before starting a journey. Used in combination with the information shown in the displays by the assistance systems, the driver can now assess three typical:

At dusk, the MirrorCam has an advantage. The light transmission of the cameras is high. Therefore, the displays show an image that is much brighter than the natural light. Drivers receive better information about their surroundings than with a mirror.

Moreover, the brightness is adjusted to the prevailing light conditions steplessly. This works both on the open road and in tunnels. If it is completely dark outside, the MirrorCam can only show the areas illuminated by the vehicle itself – just like a conventional mirror. Here, for maximum image information, the developers have selected a set-up which at present may cause a little image noise.

What truck drivers are used to in the way of looking in a mirror is more decisive. With a screen diagonal of 15.2 inches, the MirrorCam corresponds approximately with the previous mirror form. As before, the distance and speed of a vehicle to the rear can thus be estimated using size and change in size. However: many modern smartphone displays show a pixel-per-inch ratio that is often beyond the resolution power of the user’s eye. Also, the device lies in the user’s hand, so that the distance to the eye is very small. The MirrorCam displays are considerably further away and the greater the distance, the fewer details the eye can differentiate. Therefore, a pixel number similar to that of a smartphone is not at all necessary for the MirrorCam.

For conventional mirrors simple physics applies: “the angle of incidence equals the angle of reflection”. This means that whenever drivers change their sitting position, the area that they can see changes too. For the MirrorCam this is fundamentally different.

With the camera/screen combination the driver always sees the same image – in every sitting position. The field of vision can also be set individually using the door operating unit. The advantage of MirrorCam: if drivers shift the field of vision so far that legal stipulations are no longer fulfilled, they are shown a note in the display – which is not the case with mirrors. Pressing and holding the function button quickly returns the MirrorCam to the standard setting.