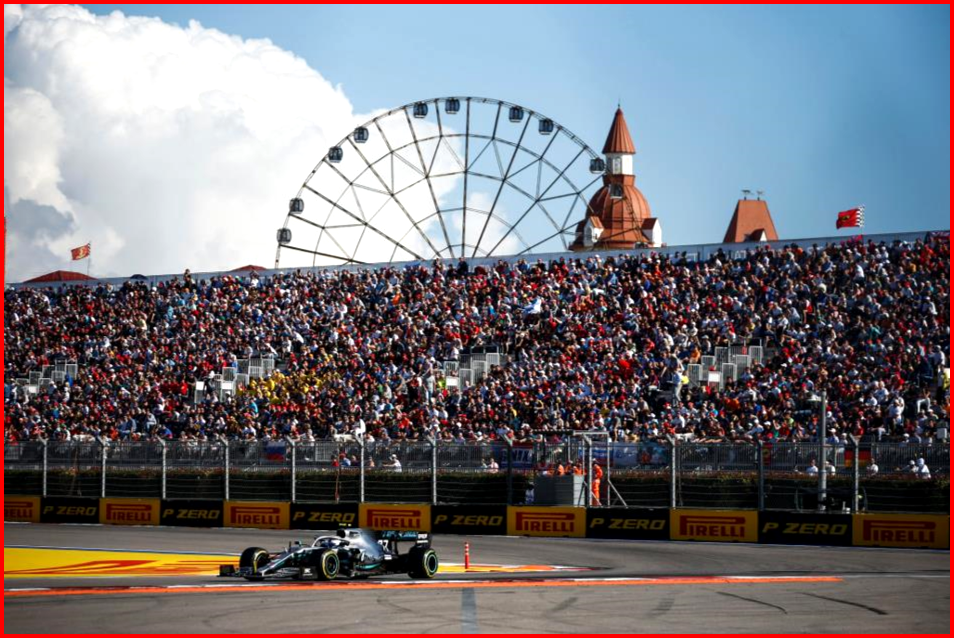 Another good Sunday for Mercedes-Benz, but for racing fans?

Formula One continued its struggle to present a race on the track at the Russian Grand Prix yesterday, as safety cars once again turned the racing into a battle of pit crews with the drivers providing entertainment via their car radio communications complaining or questioning the team strategies.

Early on Ferrari’s Charles Leclerc was on the radio saying he wanted to swap positions back with Sebastian Vettel after Vettel passed him at Turn Two after the start, with Lewis Hamilton of Mercedes having a tough time keeping up with either of them. Seems Leclerc forgot who he was really racing against by complaining that Vettel didn’t stick to the rules, whatever they were. It was clear that something was discussed before the race as a team strategy and Leclerc was miffed at the deviation by saying something wasn’t followed.

To this viewer during the start and early laps, the team strategy was working faultlessly: Leclerc had a clean start from the pole and Vettel was in his slipstream after a phenomenal launch, which pulled him past Louis Hamilton. The draft was so powerful that Vettel even went into the lead going into the first real corner at the track. Vettel then started to race at a torrid and flawless pace, and pulled away from his team-mate, who was leaving the rest of the pack behind, which means barring safety cars, virtual or real, Ferrari could now dictate the pit-stop and tire strategy for all the teams.

This was not to be. Leclerc was the first of the two Ferraris to pit, coming in on lap 22 and switching from Soft to Medium tires. Four laps later, Vettel came in, to run behind Leclerc’s Ferrari.

However, in the third sector, a problem suddenly occurred on the Ferrari’s hybrid part of the Power Unit and Vettel parked what was now a  stationary prancing horse display at the side of the track. The Race Director called for a Virtual Safety Car, which gave those who had not yet changed tires the opportunity to do so, losing only half the time of a normal stop because of the mandatory slow safety car pace. Here, Mercedes went from Medium to the faster Soft tires. This left Hamilton, Leclerc and Valeria Bottas in the other Benz as the likely winner. The question was who?

At this point, Leclerc or the team decided ton a win or lose move, coming in again – another safety car – to switch to the same Soft tires as his rivals, even though it meant ceding second place to Mercedes. LeClerc and Ferrari ultimately lost the bet.

During the last 21 laps, Leclerc tried to race Hamilton and Bottas, but the performance levels of the cars were so equal, even with DRS, Leclerc was unable to try an overtaking move, thus crossing the finish line third, five seconds off Hamilton and less than one and a half behind Bottas. He was first, however, in whining in our view.

Leclerc ducked the obvious question about his radio tantrum during the post-race press conference, “I will always trust the team,” he claimed, ignoring his radio squawking evidence to the contrary. “The tactic was me giving the slipstream (to Vettel) to be one-two at the end of the straight, which happened. But then… I don’t know, I need to speak with the team to know better the situation.”

Executive summary: Though Ferrari started one, two (Leclerc and Vettel) on the grid, and they were clearly faster than Mercedes in qualifying, as well as during the small amount of racing on the track, they had race pace for a gigantic race-long battle that didn’t emerge.

The outcome of the race at the Sochi Autodrom was particularly infuriating for the Italian team, because what caused Leclerc to fall back behind the Mercedes of Lewis Hamilton and Valtteri Bottas was the Virtual Safety Car period called to deal with teammate Sebastian Vettel’s broken SF90 parked at the side of the track. During this time, the others were able to pit for tires, losing around half the time that it cost those, including Charles LeClerc, who had pitted during normal race conditions.

When the race ended two hours later, Lewis Hamilton and Valtteri Bottas in Mercedes Silver Arrows occupied those positions on the podium with Ferrari’s Leclerc third.

Hamilton thereby took his 82nd win in Formula One, his ninth of the 2019 season and fourth at the Russian Grand Prix. Bottas came home in second place after starting fourth on the grid, securing the eighth 1-2 for the team in 2019. The race results mark the 143rd race led for Lewis Hamilton, breaking the record for most laps led  and with 322 points leading the Drivers’ Championship by 73 points ahead of Valtteri Bottas (249 points). 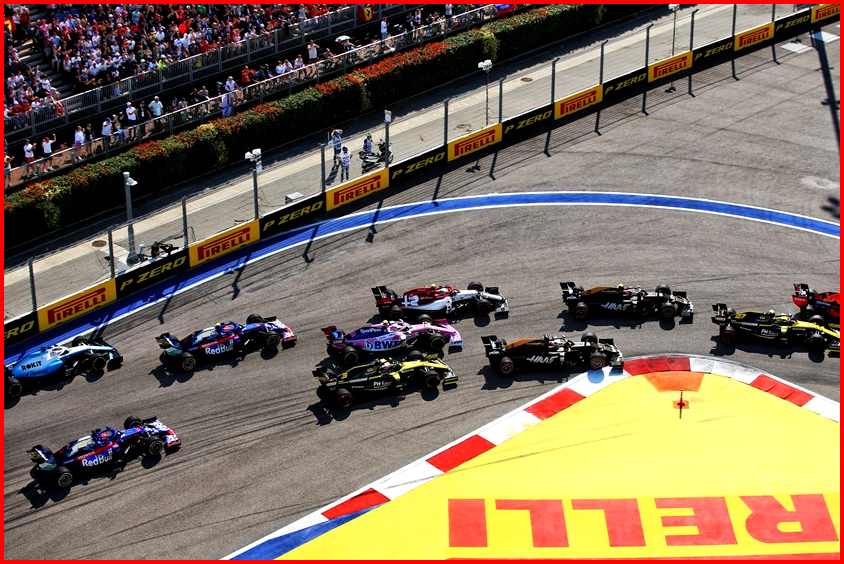 As always clean air out when running out front, not mid-pack, allows for speed and points.

The Renault F1 Team earned one point from the Russian Grand Prix. Nico Hülkenberg crossed the finish line in tenth position. Daniel Ricciardo, however, retired on lap 25 after sustaining heavy damage to his car in a first-lap incident which caused a rear-left tire puncture. The damage was much more extensive, with huge aerodynamic and balance loss. Unable to make any progress from the rear of the field, he was withdrawn from the race. 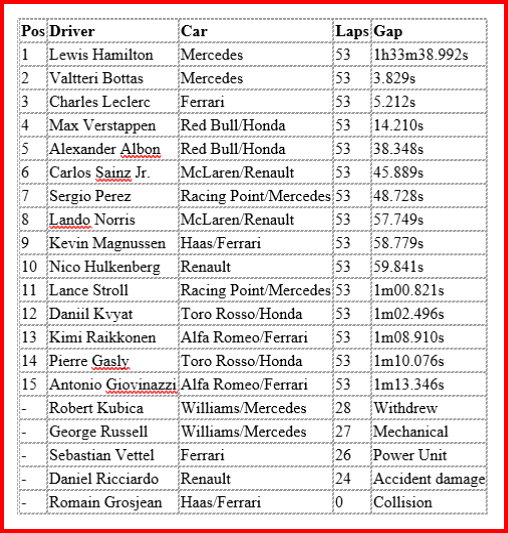 Ken Zino is an auto industry veteran with global experience in print, broadcast and electronic media. He has auto testing, marketing, public relations and communications expertise garnered while working in Asia, Europe and the U.S.
View all posts by Kenneth Zino →
This entry was posted in racing, results and tagged auto industry commentary, autoinformed.com, automotive blog, formula one, Ken Zino, Russian Grand Prix. Bookmark the permalink.