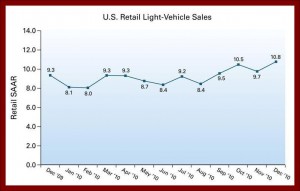 There remains concern that customers aren't dashing through current snows and to buy vehicles.

It could be a wild sleigh ride later this month, but preliminary data show that the U.S. December new-vehicle retail sales trend is significantly higher than “two-handed” economists predicted, setting the stage for a 2011 comeback for the U.S. auto industry.

Retail transactions are considered to be the most accurate measurement of true underlying consumer demand for new vehicles, since discounted fleet sales are at the whim of automakers – historically 21% of the industry and currently at 30% or more at the resurgent Detroit Three.

“Even with the possibility that sales in the third week of December may be affected by the recent winter storms, the strength in sales during the second week is expected to continue through the rest of the month,” said Jeff Schuster, executive director of global forecasting at J.D. Power and Associates. “As a result, it appears that 2010 will end on a high note.”