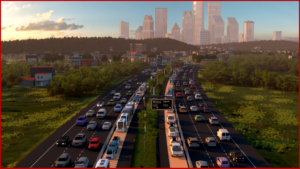 An investment in the future to save a key part of Detroit’s past. Click to Enlarge.

She claimed the main goal of the project will be to design the corridor with a focus on closing long-standing gaps in access to transit and transportation across the region.

Cavnue, a subsidiary of Sidewalk Infrastructure Partners (SIP) that specializes in  “building the future of roads,” has been selected by the state to serve as Master Developer of the corridor project. This public-private partnership – apparently formed without competitive bidding – will explore the opportunity and viability of this venture by working with state and local partners, stakeholders, and communities across the corridor from Detroit to Ann Arbor.

“The action we’re taking today is good for our families, our businesses, and our economy as a whole. Here in Michigan, the state that put the world on wheels, we are taking the initial steps to build the infrastructure to help us test and deploy the cars of the future,” said Governor Whitmer, who is widely thought to have larger political ambitions beyond the rustbelt to inside the Beltway.

“As we rebuild our roads to ensure every Michigander can drive to work and drop their kids at school safely, we will also continue working to build smart infrastructure to help prepare us for the roads of tomorrow. In Michigan, where the health of our workers and our economy are directly tied to the health of our auto industry, we will continue this innovative work to secure our state’s position as the automotive capital of the world,” claimed Whitmer.

The project foresees connecting Detroit and Ann Arbor along with key communities and destinations along Michigan Avenue and Interstate 94 in Wayne County and Washtenaw County with an infrastructure that allows for a mix of connected and autonomous vehicles, traditional transit vehicles, shared mobility, and freight and personal vehicles.

“As a company focused on the future of infrastructure, we are thrilled to launch Cavnue to build the future of roads, and partner with Michigan and the communities along the corridor on a first-of-its-kind CAV corridor,” said Jonathan Winer, co-founder and co-CEO of SIP.

The corridor will build on existing investments made by the state of Michigan and local communities in smart infrastructure and transit and will link key destinations including the University of Michigan, Detroit Metropolitan Airport, and Michigan Central Station.

The corridor includes up to a dozen Opportunity Zones, where expanded mobility will “connect individuals, small businesses, and communities to Southeast Michigan’s most important industrial, technological, and academic clusters.” Not surprisingly, this means test tracks, universities, auto companies, and what are vaguely described as “key economic anchors.”