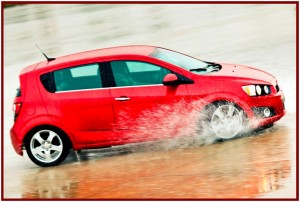 GM is now exploring how much it can charge for a small car where typically Detroit Three products need about a 20% discount when compared with facing Japanese and Korean cars.

General Motors is recalling more than 4,000 Chevrolet Sonic sub-compact cars made in Michigan because the disc brake pads may have left out during assembly. In a required filing with the National Highway Traffic Safety Administration made public on Friday preceding  a holiday weekend, GM told NHTSA that a Sonic warranty claim in November for a missing inner pad first alerted the automaker to the assembly-caused safety defect. GM will notify owners of 2012 Sonic models and dealers will inspect the front brakes for a missing inner or outer pad.

How a car without brake pads could leave the Orion Township assembly plant, or pass a pre-delivery inspection was not addressed in the terse NHTSA filing. The embarrassing safety defect comes just before the public unveiling of the 2013 Sonic RS performance model – 138-horsepower from a turbocharged engine – at the North American International Auto Show in January.

If a brake pad is missing, dealers will install new inner and outer pads, a new brake caliper, and a new rotor. This service will be performed free of charge as is required by U.S. law. The safety recall – 11354 – is expected to begin on or before 14 January 2012 and covers Sonic four- and five-door models built from June through November of 2011.

The suggested retail price of the 2012 Chevrolet Sonic sedan begins at $14,495 including destination but excludes tax, title, license and dealer fees of course, closely tracking the slightly smaller Ford Fiesta. Add another $1,040 if you want an automatic transaxle. The five-door hatchback Sonic starts at $15,395, again contrary to previous domestic marketing dogma that maintains hatchbacks are inexpensive cars. Fully loaded Sonic models will approach and in theory could surpass $18,000. So we have bets and side bets going on here as GM seeks to reach levels of profitability on small cars that could boost its sagging stock price. How customers respond is another matter.

GM is exploring how much it can charge for a small car in an area where, typically, Detroit Three products needed roughly a 20% discount (or more) compared with facing Japanese competition. In this case there are, notably, the Honda Fit, Nissan Versa and Toyota Yaris – all well established and priced roughly the same as Sonic, from companies that up until now are the acknowledged small car leaders. Sonic also faces stiff competition from the upstart Koreans – Hyundai and Kia – whose competitive models significantly under price it.