Midsize Chevrolet Colorado Pickup Will Be Built in U.S. 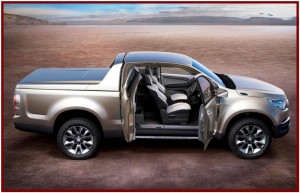 Will the midsize pickup truck market revive in the U.S. because of $4 gallon fuel and new product?

At least one model of the all-new Chevrolet Colorado midsize pickup will be built and sold in the United States, Chevrolet confirmed today. Well, the confirmation was hardly news since part of the new GM UAW contract announced that Wentzville, Missouri would get a new midsize pickup program as AutoInformed reported at the time. (See GM UAW Contract Offers Profit Sharing, Some New Jobs)

The first version of the Chevrolet Colorado truck is launching this month in Thailand. This will be followed by South and North American intros. Product details, timing, pricing and the production location (?) will be announced later, according to the official GM statement. The current-generation Colorado will be produced in Shreveport, Louisiana through the 2012 model year.

The GM Colorado decision once again raises the Ford Ranger question. Ford Motor once dominated the compact pickup truck market in the U.S. until years of product neglect combined with an assault by Toyota and Nissan pushed it to a footnote in the segment. This first forced the closing of Ford’s Edison, New Jersey plant. The remaining plant in Minnesota did not survive the tentative Ford UAW contract that is now being voted on, and will shut down later this year. 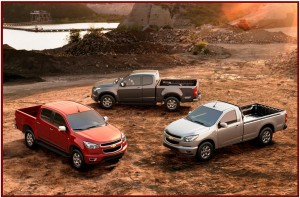 The all-new 2012 Chevrolet Colorado range has single, extended and crew-cab body styles. It is the product of a five-year, U.S. $2 billion program developed across five continents for customers in more than 60 markets.

In Thailand, the Chevrolet Colorado lineup includes 2wd and 4wd regular, extended-cab and crew cab body styles. Gasoline and diesel engines will be available, including a new 2.5-liter and 2.8-liter turbocharged diesel engines that produce broad torque bands engineered for excellent cargo and towing capability. Colorado appears to have all the product attributes that make for a marketplace success.

The new Chevrolet Colorado is based on an all-new midsize truck architecture developed by GM do Brasil within GM’s global product development organization. In major markets where the Colorado will be sold, engineers will tailor the truck to meet local needs.

Ford, too, has a brand new Mazda-developed pickup truck that just went into production in Thailand. Ford is billing the compact pickup truck as a global entry – it will be sold throughout Europe, Asia and South America.  Ford, thus far, says it has no plans to offer the Ranger. Instead more fuel efficient models of the gigantic F-150 pickup, still the best selling vehicle in the U.S., will appear. As a fallback, Ford could import the Ranger. Importing the new Ranger from Thailand, as Ford will for European and Asian sales, would be controversial.

In the U.S. (up until gas fuel prices went up again last year), small pickups seemed a dying breed. The U.S. sales leader last year was Toyota Tundra at 93,000, well ahead of Ford Ranger at 55,000, Nissan Frontier 40,000, Chevrolet Colorado about 25,000 and GMC Canyon 8,000. These small haulers hit the U.S. market with a bang 30 some years ago, paving the way for Japanese passenger cars in the process