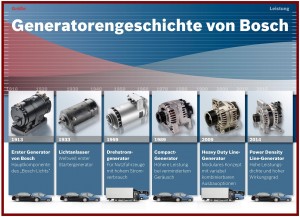 One hundred years ago, Bosch introduced the world’s first voltage-regulating generator for motor vehicles. Back then, it was only a power source for what were newly invented electric headlights by Cadillac founder Henry M. Leland. Leland also pioneered electric ignition on his cars, while Bosch – a magneto company – trailed that development. These were the early days of the electrification of the automobile, which continues to this day.

Bosch produced the electric starter in 1914, two years after an electric starter debuted in the 1912 Cadillac Touring Edition. It is hard to imagine, but before the invention of the electric starter by Charles Kettering, it took hand cranking, considerable muscle, and some luck to wake up a Tin Lizzie or one of its ilk. This fathered the American slang term ‘cranky’ still in use, which was said to describe someone’s mood after struggling to start a car. (Read AutoInformed on Milestones: Cadillac Electric Starter Eliminates Hand Cranking)

Today, alternators, the successor to generators, power an overwhelming array of electrical systems for customer convenience, and they also make automobiles cleaner, safer and more efficient. Alternators are getting smaller, more robust, and more powerful, according to Ulrich Kirschner, president of the Bosch Starter Motors and Generators division, summing up the ongoing development process. While the first generators provided an output of just 4 amps, the latest generation of Bosch alternators provides 130 to 250 amps.

Before 1913, Bosch manufactured mostly ignition systems, a single product focus that was increasingly risky as automotive development exploded. In 1913, the Bosch automotive lighting system was ready for what passed for mass production in those days. The package was offered as a retrofit and consisted of two headlights, the generator, a battery, and the voltage regulator.

Today the Bosch Group is a global supplier of technology and services, active in the fields of automotive technology, energy and building technology, industrial technology, and consumer goods. More than 306,000 workers generated sales of €52.3 billion in 2012. The Bosch Group comprises Robert Bosch GmbH and its more than 350 subsidiaries and regional companies in 60 countries. Bosch spent some €4.5 billion for research and development in 2012, and applied for more than 4,700 patents worldwide.