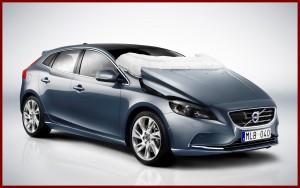 Nothing “pedestrian” about this Volvo safety technology.

The first Volvo cars equipped with airbags came off the assembly line in 1987, long after the inflatable device was in widespread use by the Detroit Three. Since then Volvo has scrambled to regain its safety leadership reputation in an automotive world where advanced safety technologies unthinkable a decade ago are now standard equipment. Volvo was first with both the seat-mounted side airbag (1994) and the Inflatable Curtain (1998). In 2012, the Volvo airbag’s 25th anniversary was celebrated with the introduction of another first – a pedestrian airbag in the all-new Volvo V40.

“It is the first time airbag technology has been used to help protect vulnerable road users, in this case pedestrians, outside the car,” says Lennart Johansson, Senior Manager for Interior safety at Volvo Car Corporation.

The airbag has been a standard feature in all cars for almost three decades now, but in the early days both the technology and its reliability created intense debate with safety advocates and government regulators who were ignoring the very real problems earlier designs had. The problem in the U.S. was largely caused by Joan Claybrook and other advocates and legislators who sold the idea of the airbag as eliminating the need for unpopular safety belts and belt interlock systems that sounding warnings or prevented the car from running.

In spite of extensive crash test data from Ford and General Motors, among others, showing that the regulation proposed in 1984 and effective in 1987 required a too powerful explosion to protect an unbelted 170-pound male without hurting smaller stature people the law went ahead.  Regulators and politicians simply ignored the engineers. Dead drivers and passengers, some of them decapitated, were the grisly result until the regulations were rewritten as field results came in – dead on arrival so to speak.

“Getting an airbag to deploy is not a challenge, but making it deploy at exactly the right moment is,” says Johansson talking about current technology. “In recent years, the timing and the performance level of inflation have been in focus. And in modern airbag technology, the inflation level can be adapted to match crash severity.”

The use of sophisticated radar and cameras late model cars presents the possibility of activating protective safety systems even before the impact if necessary. Let us hope the advocates and pols leave it to the engineers this time around.