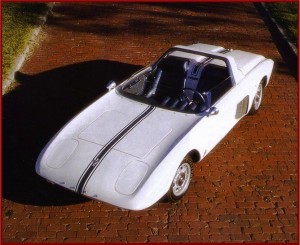 The original Mustang concept actually started development work on the Ford GT40 race car, winner of 4 straight 24 hour-races at Le Mans until it was outlawed.

It was 50 years ago that Ford Motor Company decided to show a mid-engine, V-4 powered two-seat concept car at the Watkins Glen Grand Prix.  While the striking handsome white car – still residing at the Henry Ford museum in Dearborn – was never built, the brand name it introduced remains one of the most famous in automotive history.

On Saturday 6 October 1962, racer Dan Gurney was behind the wheel as Ford introduced the Mustang to the world. Stirling Moss, recovering from race injuries and appearing as honorary starter, helped show off the car on race day. That concept actually kicked off development of the Ford GT40, which went on to win LeMans four times starting in 1966 before a corrupt European sanctioning body outlawed it. 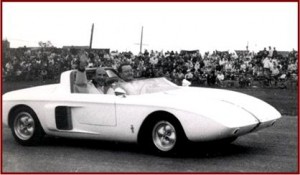 “A lot of us enthusiasts knew that this was the thing to come when Ford pledged that they would be racing in all forms,” said Bill Green, who is the historian for the Racing Research Center and Watkins Glen International.

The 1962 Watkins Glen Mustang reveal was the result of a partnership between Ford and the Watkins Glen Grand Prix Corporation that started a year earlier and would continue through 1967 and then be revived in later years at Watkins Glen International.

Another Mustang concept was shown to race fans at the 1963 U.S. Grand Prix at the Glen. The third “real” version went on sale in April 1964 – no the usual fall introduction – catching GM and Chrysler by surprise and establishing the pony car class that exists to this day. That right, a 1964.5 intro.

The privately funded International Motor Racing Research Center at Watkins Glen is honoring the historic first public appearance of the Mustang brand 50 years ago at Watkins Glen by with a 2013 Boss 302 as its fund-raising raffle car.

The Center is selling 1,962 raffle tickets for this iconic production vehicle, valued at $44,900. The raffle is the major annual fund-raiser for the non-profit facility, a leader in the collection of materials representing the documentary heritage of amateur and professional motor racing worldwide and especially at Watkins Glen.

The Center is located just minutes from world-famous Watkins Glen International. Tickets can be purchased by calling the Center at 607-535-9044 or by using a form posted on the Center’s website at www.racingarchives.org.