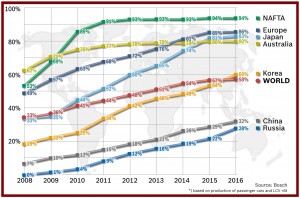 Worldwide, 48% of all new passenger cars and light commercial vehicles are now fitted with ESP.

Bosch pioneered this advanced safety technology, which is increasingly mandatory equipment under the constantly expanding global regulation of vehicles. According to studies, this active safety system can prevent up to 80% of all skidding accidents.

“After the seat belt, ESP is the most important safety system in cars, and has saved many lives over the past years,” said Gerhard Steiger, the president of the Bosch Chassis Systems Control division.

In Europe ESP is required for all vehicles whose type approval was granted after October 2011. As of November 2014, ESP will be standard equipment in all new vehicles throughout the EU. Today, 72% of all newly registered cars and light commercial vehicles in Europe are equipped with ESP.

In the United States, it is mandatory in all vehicles up to 4.5 metric tons. Similar regulations will come into force in the next few years in Australia, Japan, Korea, and Russia. Worldwide, 48% of all new passenger cars and light commercial vehicles are now fitted with ESP; in China, nearly every fifth new car rolling off the production line features ESP.

Since series production began in 1995, Bosch said it made incremental improvements to the system, incorporating additional functions. Where the first version weighed 4.3 kilograms, the basic version of the latest Generation 9 is lighter and more compact at just 1.6 kilograms. Similarly, Bosch has managed to bring its price down, thus playing an important part in making this crucial safety system affordable even for small cars.

New “assistance systems” building from ESP are in process. Bosch and other major suppliers are  developing or producing functions that automatically maintain a safe distance to the car in front, that guide the vehicle into the tightest of parking spaces, and that warn the driver promptly in critical situations. Many of these functions have one thing in common: they operate the brakes independently of the driver.

The Bosch Group is a leading global supplier of technology and services. According to preliminary figures, more than 300,000 associates generated sales of €51.4 billion in automotive and industrial technology, consumer goods, and building technology during 2011. The Bosch Group comprises Robert Bosch GmbH and its more than 350 subsidiaries and regional companies in some 60 countries. Bosch spent more than €4 billion for research and development in 2011, and applied for over 4,100 patents worldwide.