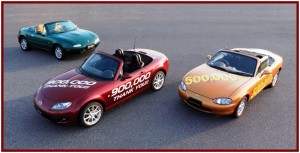 Miata’s starting price was $14,000, and early production did not meet demand for what was – paradoxically – the last of the British roadsters.

What Mazda dubs as the world’s best-selling two-seat roadster, the Mazda MX-5 Miata, has reached a new milestone of 900,000 units produced.

Nearly 45% of  the two-seat Miata roadsters made – about 388,000 – were sold in the United States since the Miata launched there in the last century.

The MX-5 – called Mata in the U.S. only –  made its global debut at the 1989 Chicago Auto Show and has since received several facelifts, along with many limited and special edition versions.

The first-generation MX-5 Miata (1990-1997 model years) was equipped with a 1.6-liter, inline four-cylinder engine that produced 116 horsepower and 100 lb-ft of torque. A removable hardtop was optional and color choices were red, white and blue.

Miata’s  starting price was $14,000, and early production did not meet demand  of what was – paradoxically – the last of the squared-jawed British roadsters, with a badly needed super-sized dollop of Japanese quality, durability and resale value.

The 900,000th Miata is a soft-top, six-speed manual transmission  Copper Red MX-5. This Mx-5 is destined for Germany, where Mazda still achieves unusual Continental sales success, which I attribute to Mazda’s early development of the Wankel engine in a series of sport coupes that fascinated Germans. 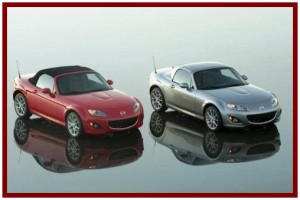 “As we head toward the next production milestone of one million units, Mazda is committed to further evolving the MX-5,” said Seita Kanai, Mazda Motor Corporation (MC) executive officer, research and development.

“We will refine its fun-to-drive character as well as further enhance its environmental and safety capabilities.  In the years ahead, we will continue to cherish the MX-5 alongside its loyal fan base as the symbol of the Mazda brand,” Kanai said.