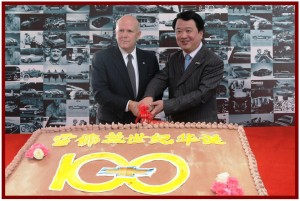 Chevrolet is officially recognizing its 100th birthday today by offering deals across the United States. The latest birthday, or marketing push, ends a year-long Chevy Centennial celebration that began last January at the North American International Auto Show in Detroit. Along the way, special edition vehicles were promoted as GM honored its most popular brand.  True to form today, Chevy dealers across the nation are holding open houses along with sales promotions that run through 7 November. Fans can visit the Chevrolet website to learn more about local centennial celebrations.

The first Chevrolet was built in a rented garage near downtown Detroit in 1911. If it wasn’t for a taxpayer-sponsored reorganization, Chevrolet would likely have expired after 98 years, along with General Motors, which was founded in 1908.

Chevrolet’s history is tangled, and its beginnings were subject to Wall Street stock market maneuverings that are wearily similar to current financial history and duplicity. As outlined in a revised book – David Buick’s Marvelous Motor Car – a complex set of events led Willy Durant to develop the Chevrolet automobile.

Durant, of course, formed General Motors in 1908, with Buick as the cornerstone, and soon bought Oldsmobile, Cadillac, Oakland (Pontiac’s predecessor) and two dozen other companies under a GM holding company. However, Durant lost control of the company to bankers in 1910 after his money supply was cut off. To get new financing Durant, while remaining a GM vice president, relinquished control of the company to a new board comprised of bankers – but without taxpayer subsidies.

Unhappy with that arrangement, Durant in 1911 began working with Louis Chevrolet, whom he had supported as a star of Buick’s racing team, to develop a new car company. He wanted it to grow to the point where he could use profits from the stock to regain control of GM — his “baby” – from the banker dominated board. Durant got Chevrolet off to a fast start, traded Chevy stock for GM stock, and regained control of GM during 1915 to 1916.

Chevrolet is also the subject of a new Chevrolet Centennial documentary – actually it’s a commercial – produced by filmmaker Roger Sherman. “Chevy 100, An American Story,” which explores Chevrolet through the views of owners, collectors, journalists and what are termed historians. This infomercial lacks an organizing theme, other than it’s time to sell more Chevys, in between sporadic observations about the history of the brand and large amounts of footage from owner’s clubs.

There are large gaps in automotive history in this disjointed account, which tries to downplay Henry Ford and, in the case of hot-rodding where the Ford flathead V8 appeared in 1932. Chevrolet didn’t have a response until the small block V8 of 1955. In some cases, the voice-over doesn’t match the film. Following the premiere tonight at the Detroit Institute of Arts, the film will air nationally on 21 November at 8 p.m. on the Velocity Channel. It will then be available on DVD from chevymall.com.

Chevrolet is also celebrating its centennial around the world. Chevrolet Europe is recognizing Louis Chevrolet’s Swiss birthplace of La Chaux-de-Fonds by commissioning a piece of public art on the Parc de l’Ouest. In Korea, Chevy customers set a Guinness World Record by creating the world’s largest car logo.

Chevrolet also joined with the Indianapolis 500 to celebrate 100 years of shared history, and announced that it is returning to Indy car racing as an engine supplier and as sponsor of the Detroit Grand Prix. (Chevrolet Camaro SS Convertible to Pace Indianapolis 500, IndyCar Racing to Return to Detroit Next Year and IndyCar Returns to Detroit for Chevrolet Belle Isle Grand Prix)

Chevrolet launched its interactive Chevy100.com website earlier this year and recently added two interactive web experiences: “The Road We’re On” and “The Ride of Your Life.”