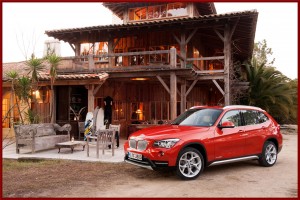 Since its fall of 2009 introduction the compact BMW X1 sport utility vehicle has reached 300,000 in global sales, the German Automaker said today. The X1 was arguably the first luxury cute ute, and the fourth addition to the BMW crossover lineup from a maker once largely known for its sports sedans.

The five seat SUV has evolved since then, and depending on the market, it offers a choice of five diesel and three gasoline engines with an output ranging from 85 kW/116 horsepower to 180 kW/245 horsepower, the most varied or complicated portfolio in its segment. BMW and its communist government required joint venture partner, Brilliance China Automotive Holdings, just started building the X1 in China, one of the BMW Group’s top three markets worldwide.

The most powerful gasoline and diesel engines each come as standard with an electronically controlled, variable power distribution system dubbed xDrive, which uses an open differential and the antilock braking system to transfer torque between the front and rear wheels. BMW claims this is an alternative to its typical rear-wheel drive setup. It is also a needed counter to Audi’s Quattro and Mercedes-Benz’s 4matic all-wheel drive systems.