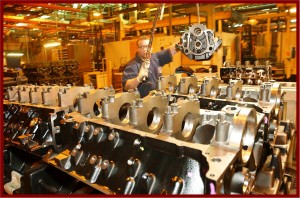 The General Motors Tonawanda engine plant has built its final 2.4-liter Ecotec four-cylinder engine, 13 years after production began in 1999. Since the New York State factory opened in 1938, more than 70 million engines have been assembled there.

GM’s large four-cylinder engine had the lowest warranty costs of all GM-made engines, the automaker claims. Two new production lines are now running at Tonawanda – one producing 2.5- and 2-liter turbocharged four cylinder engines, and at the opposite end of the spectrum, one making the so-called Gen V V8 engine.

The 2012 Malibu assembled in Fairfax, Virginia was the last application for the 2.4-liter engine. Older versions of the 2.4, including a 2.2-iter version, powered the Chevrolet HHR, Impala, Cobalt and Saturn Ion. Tonawanda will continue to make 2.4-liter blocks, heads and crankshafts for export to China through the first quarter of 2013.“Each person on the 2.4L team took on additional responsibility for performing several jobs daily as they built one part of the engine in the morning, and then moved down the line to finish them in the afternoon,” said UAW Local 774 Shop Chairman Bob Coleman. “When you’re starting up two new product lines and building out two lines, you do what it takes to have them all be successful.”

In February 2010, the plant funded in part by U.S. taxpayers received a $425 million investment for the Ecotec 2-liter and 2.5-liter four-cylinder engine that is now going in the next generation 2013 Chevrolet Malibu and the 2013 Cadillac ATS; and a $400 million investment awarded in April 2010 to build an all-new V8 engine

Tonawanda Engine now has 1,018 hourly and salaried employees and will be adding another 40 employees transferring next month from a GM Component Holdings plant in Lockport that was shut as part of the GM bankruptcy in 2009 to help staff the new product lines.