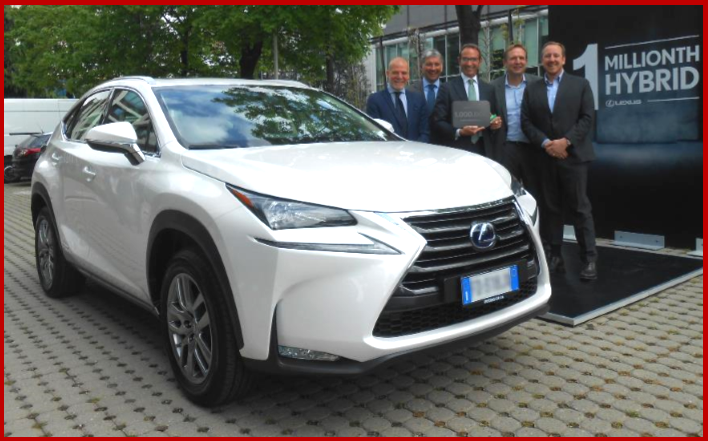 Lexus International says it has now sold more than 1 million hybrid vehicles since the world’s first luxury hybrid vehicle, the RX 400h, went on sale in April 2005. With 10 models incorporating Lexus Hybrid Drive, Lexus is the luxury segment hybrid leader much to the chagrin of Audi, BMW and Mercedes-Benz executives. To note passing the milestone, a new NX 300h was delivered to a Lexus customer in Milan, Italy.

“This is my first Lexus. I chose this brand because I really value it. When I saw the new Lexus NX 300h, I was immediately captured by its design, and of course the hybrid technology made me enthusiastic. I was surprised to hear that I was the buyer of the 1 millionth Lexus hybrid, and I am honored to celebrate this important milestone with Lexus!” said Aldo Pirronello, the new NX 300h owner. (Center in photo with plaque.)

Ken Zino is an auto industry veteran with global experience in print, broadcast and electronic media. He has auto testing, marketing, public relations and communications expertise garnered while working in Asia, Europe and the U.S.
View all posts by Ken Zino →
This entry was posted in milestones and tagged autoinformed.com, Ken Zino, lexus hybrid. Bookmark the permalink.