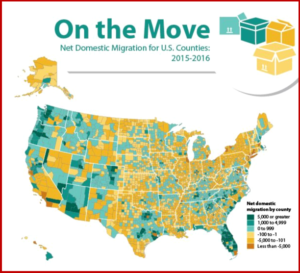 Maricopa County, home to Phoenix, primarily grew through the addition of 43,189 residents from “net domestic migration,” that is how many people move to or from an area versus other parts of the United States. The county also added 25,428 people from natural increase (more births than deaths) and 10,188 people from net international migration.

Harris County, Texas, home to Houston, saw changes in net domestic migration, going from a net gain of more than 17,000 to a net loss of more than 16,000. Despite this, Harris County had the second largest gain in population due to high natural increase (46,412) and net international migration (27,922).

“In the early 2000s, Maricopa County was in the top one or two counties by numeric growth. From 2009-2011, Maricopa County saw much lower net migration than in the years before or after, which caused the county to drop out of the top population-gaining counties,” explained Peter Borsella, a demographer in the Census Bureau’s population division. “While net international migration has not reached prior levels, net domestic migration and natural increase have continued to rise, making Maricopa County this year’s largest numeric gainer.”

For the fourth year in a row, The Villages, Fla., a metro area west of the Orlando-Kissimmee-Sanford, Fla., metro area, was the nation’s fastest-growing metro area, with a 4.3% population increase between 2015 and 2016.

Baltimore city saw an increase in population loss this year primarily due to a doubling of its net domestic out-migration.