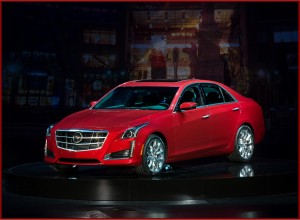 The 2014 CTS is taking on the Germans by leaving some of its more radical design themes behind.

The one millionth Cadillac built at the Lansing Grand River Assembly Plant came off the line today. The car vehicle is an early model of the redesigned 2014 CTS sedan, which goes on sale in October. Lansing Grand River, aka LGR, has been a dedicated rear wheel-drive assembly plant since it opened in late 2001. Every CTS ever made has been built there.

In addition to the CTS, the plant also assembles the compact ATS sedan, the CTS Coupe and Wagon, and the CTS-V performance models. Cadillac models from Lansing are exported from Michigan to 11 destinations worldwide. The next redesign of the Camaro, circa 2015, will see the Chevrolet assembled there as well.

In GM’s latest attempt to make Cadillac a global brand, it is increasing the size of the CTS while toning down its distinctive styling that made it successful in the U.S., but is thought too radical for offshore customers of German and Japanese luxury cars. This no doubt will set off an interminable and pointless debate about whether Cadillac can catch BMW – the answer of which is not any time soon as it is a decades long task. (First Look – 2014 Cadillac CTS Mid-Size Sedan and Cadillac Twin-Turbo Debuts in All-New 2014 CTS Sedan)

The third-generation CTS sedan is based on the rear-drive architecture of the competent compact ATS sport sedan, but in a larger mid-size package. A range engines and transmission will be available, including the all-new Cadillac Twin-Turbo engine and GM’s first eight-speed automatic transmission in top of the line Vsport (sic) models.

Cadillac claims that the longer and lower proportions are more “athletic” and is an “evolution” of the angular look introduced as part of the brand’s Art & Science design philosophy that the original CTS debuted.

In reality, the sharp angular stance has been rounded off, moving the styling more – but not all the way – toward mainstream inoffensive, ironically at the same time as BMW is adding angles and creases.

While growing five inches in length, including a 1.2-inch longer wheelbase, the CTS roofline and cowl at the base of the windshield are about an inch lower, resulting in a slight loss of EPA rated interior and trunk space down to 110.6 cubic feet from the existing 111.6. 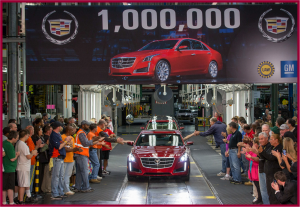 The one-millionth Cadillac built at the Lansing Grand River Assembly Plant, a 2014 CTS sedan, coming  off the assembly line on Monday 16 September 2013 in Lansing, Michigan.

A total of 1,541 employees are divided between two shifts at LGR, which comprises a 2.5 million square foot facility on 111 acres.

General Motors has invested $190 million during the past three years for the production of the Cadillac ATS and $88 million for the new CTS.

Ken Zino is an auto industry veteran with global experience in print, broadcast and electronic media. He has auto testing, marketing, public relations and communications expertise garnered while working in Asia, Europe and the U.S.
View all posts by Ken Zino →
This entry was posted in manufacturing, new vehicle and tagged ats, autoinformed, autoinformed.com, cts, Ken Zino. Bookmark the permalink.