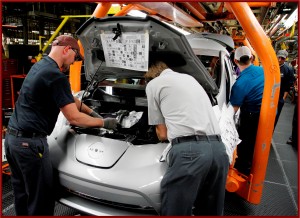 Leaf assembly in Smyrna will contribute to Nissan’s stated goal of manufacturing 85% of its U.S. sales volume in North America by 2015.

Nissan is starting U.S. assembly of the 2013 Leaf electric car at its manufacturing plant in Smyrna, Tennessee, where it will be made along with the far more popular Altima and Maxima models. Since 2010 Leaf has been imported from Oppama, Japan,

The start of Nissan Leaf assembly in Smyrna, about a year behind the original schedule due to slow sales, comes after the opening of Nissan’s battery plant late last year in an adjacent facility. This plant is the United States’ largest lithium-ion automotive battery plant; and is said to be one of only three of its kind in the world operated by a major automaker. People looking for a battery breakthrough will be disappointed. It appears the same laminated 24 kWh lithium-ion (Li-ion) battery with 192 cells will carry over.  Range has not been released.

Nissan has the capacity to make 200,000 battery packs in Tennessee annually. U.S. taxpayers subsidized the battery operation through a $1.4 billion loan from the U.S. Department of Energy, which looked to be a way for the Obama Administration to get Republican Senator Corker of Tennessee to drop his opposition at the time to the bailouts of GM and Chrysler.

Leaf assembly in Smyrna will contribute to Nissan’s stated goal of manufacturing 85% of its U.S. sales volume in North America by 2015. The strong Japanese Yen is forcing all Japanese automakers to produce more local content. Nissan said the addition of Leaf and battery assembly has resulted in the creation of more than 300 U.S. manufacturing jobs, a number that can increase if Nissan’s optimistic sales forecasts for EVs ever materialize. For the moment, beyond a small group of EV true believers, mainstream buyers are scoffing at the cost of $40,000 and up EVs.  (Read AutoInformed on 2012 Record Year for U.S. Hybrid Sales, But EVs Remain Insignificant and Nissan to Add 15 Hybrid Models by 2016)

The 2013 Nissan Leaf now has an optional 240-volt on-board charging that is nearly twice as fast – about 4 hours; the standard 110 volt is 21 hours – as the previous model, as well as a broader range of trim levels. In an attempt to boost sales, Leaf now has a so-called S grade with an unspecified but less expensive starting price. The least expensive 2012 Leaf had a starting price of $35,200 with tax subsides. (Read AutoInformed on Green Talk from EV Makers Ignores Key Buyer Concern – Cost)

The 2014 Chevrolet Spark EV will be priced under $25,000 with tax incentives when it goes on sale starting next summer in California, Oregon, Canada and South Korea. Spark EV will be eligible for controversial high-occupancy vehicle (HOV) lanes in California. The price is roughly twice that of a gasoline powered minicar, and that’s with incentives.

The Korean made Chevrolet, along with a limited number of Chinese-built Sail Springo clones at the RMB equivalent of $41,425,will be powered by an electric motor rated at 130 horsepower (~100 kW) and 400 lb.-ft. (542 Nm) of torque, which will provide strong acceleration for the tiny four seat car. In theory this means zero-to-60 mph acceleration time of less than eight seconds is possible, but the car will no doubt be top-speed limited somewhere around 80 mph or so. The 20-kWh lithium ion battery-pack is expected to be among the best EVs for range in its segment, according to GM, which has not released certification numbers as yet.

Spark is a tiny five-door, four-passenger hatchback that has been on sale in Europe, Korea, India, Mexico, South America and Australia three years where minicars are more saleable, both thus far and historically. (Spark has sold more than 600,000 vehicles globally.) Spark came to the U.S. last  year as a 2013 model, and 12,000 have now been sold. In comparably-sized mini-cars, there is only the Fiat 500 (44,000 in 2012), which is four inches shorter, and the Scion IQ (8,999 during 2012). Here the Spark is a good value, since it starts at under $14,000, which is thousands less than the imported from Japan Scion or the Mexican-built Fiat.