Milestones: One Million Fiat 500 Cars. EV Comes to California in 2013 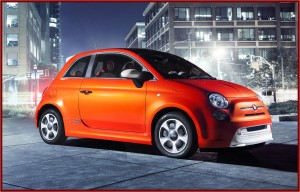 The one-millionth Fiat 500 has driven off the Fiat Auto Poland production line. Since its reappearance in 2007, the tiny Cinquecento or 500 has been sold in more than 100 countries – Italy, the Middle East, South Africa, Japan, as well as Brazil and the United States.

In North America the minicar has been assembled in Toluca, Mexico since 2011 as one of the requirements for taxpayer funding for fuel-efficient cars that was part of the conditions imposed during Chrysler’s taxpayer-funded bankruptcy bailout. More than 70,000 500s have now been sold in the U.S.; and in its most fuel-efficient manual transmission version it is rated at 31 mpg city and 40 mpg highway by the EPA.

In 2013 an all-new battery-electric Fiat 500e will go on sale in California, the product of a regulations that dictate design not performance goals. The 500e, which Chrysler CEO Sergio Marchionne loudly says will sell at a loss for each copy, will be publicly shown for the first time at the 2012 Los Angeles Auto Show later this month.

No technical details or prices have been released for the 500e yet, but it will be a small volume curiosity at best, because pure EVs now have less than a 1% share of the U.S. market. This at least will hold down Fiat losses for Marchionne who has his hands full dealing with Italian politicians and the slumping European economy. (See Green Talk from EV Makers Ignores Key Buyer Concern – Cost, EU Car Sales Continue to Evaporate in October – Off -5% and Fiat Group Doubles Q3 Profit to €286 Million. Revenue €951 Million)

More promising for profits and shareholders is an all-new Fiat 500L that also appears next year with national distribution. The L stands for ‘Large’ – and it is an (alleged) five-passenger five-door vehicle that will expand the sales potential of the Fiat 500 into the sub-compact B-segment. It is currently on sale in Europe with good sales volumes so far for a startup product.