Milestones – One Million Jeep Wranglers Made at Toledo 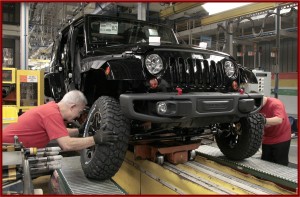 The sprawling Toledo complex, famous in its own right, became the center of a Romney Presidential campaign controversy last fall, when a desperate Romney trailing in virtually all industrial states used attack ads proclaiming that Chrysler was going to move the jobs in Toledo to China. It was a complete falsification and came as Chrysler was expanding and retooling the North Plant, where the all-new 2014 Jeep Cherokee will be built. 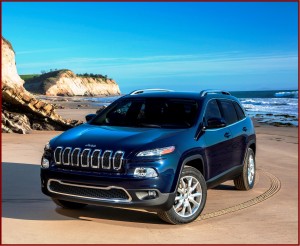 Marchionne notes Alfa Romeo and Jeep are the only two brands of Fiat and Chrysler with global potential because they are easily identified by consumers nearly everywhere.

The Dart and now the Cherokee are significant because they are the first test of Fiat CEO Sergio Marchionne’s bet that combining with Chrysler a – made possible by billions in U.S. and Canadian taxpayer dollars – can result in a company that can successfully design, develop, manufacture and sell vehicles under Fiat’s control. Under the plan, the majority of Chrysler vehicles by 2014 will be based on ‘donor’ architectures, engines and other major components from Italian Fiat.

The Cherokee mid-size SUV is the first offering from the famous off-road brand that uses a Fiat-derived unit- body platform; and a much smaller one is also under development that will be built in Italy. (It was Mitt Romney’s father George who first moved some Jeep production out of the U.S. after WW2.) As a result of the global nature of the auto business it looks like Cherokee will eventually be made in the U.S., Italy, South America and China, where Chrysler is in the final stages of setting up a deal with a Chinese government required partner.

When Cherokee goes on sale in the U.S. this fall, it debuts, four and six-cylinder front-wheel-drive models, three revised four-wheel-drive systems, a 9-speed automatic transmission. There is a new 3.2-liter Pentastar V6 engine with 4,600 pounds of towing capacity. There is also 2.4-liter “Tigershark” MultiAir four-cylinder that will deliver a 45% fuel economy improvement compared to the outgoing and slow selling Liberty model. Fuel Economy numbers have not yet been announced.

Toledo Assembly Complex’s Supplier Park began production of the Jeep Wrangler and Wrangler Unlimited in 2006. Located on the same site as the former Stickney Plant, the complex includes body and chassis operations, produced in partnership with suppliers Kuka and Mobis, respectively.

In the fall of 1997, Toledo North was built for the production of the Jeep Liberty, which launched in April 2001, and later added production in August of 2006 for the 2007 Dodge Nitro, both slow selling entries the booming compact SUV class dominated by Toyota RAV4 and Honda CRV. The last Jeep Liberty and Dodge Nitro rolled off the line in August 2012 and December 2011, respectively. Toledo North will add 1,105 new jobs on a second shift in the third quarter, bringing total complex employment to more than 3,000.