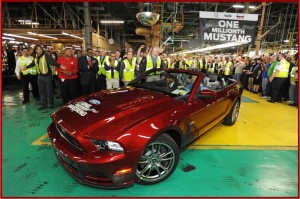 Mustang was built at the Rouge, close to Ford headquarters, for four decades before moving a few miles south to Flat Rock in 2004.

Introduced in April 1964 at the New York World’s Fair, Mustang caught GM and Chrysler napping as it proved immensely popular and without competition, creating a new class of vehicles in the process, dubbed pony cars after the original one.  Success was so great that it gave rise to the quip at Ford that there were no so many claimed fathers of the Mustang, one would hate to be the mother.

The Rouge assembly plant could not satisfy demand. By early 1965, plants in Metuchen, NJ and San Jose, CA were also building Mustang. Less than two years later, on 2 March1966, the one-millionth Mustang rolled off the line in Dearborn. To date, Ford has produced and sold more than 8.5 million Mustangs.

The Mustang was built at the Rouge, a few minutes from company headquarters, for four decades before moving a few miles south to Flat Rock in 2004. The launch of Mustang production at Flat Rock coincided with introduction of the then all-new fifth-generation model – first in the series to get a dedicated platform and a sign then of Ford’s age-old inability to merge its myriad architectures.

In addition to the standard V6 and the V8-powered GT model, Mustangs out of Flat Rock have included several special editions:

Flat Rock factory has made vehicles since 1987, when it opened as Mazda Motor Manufacturing USA and built the Mazda MX-6. In 1992 Ford purchased a 50% share in the plant and it was renamed AutoAlliance International. Flat Rock has produced the Mazda 626, Mazda6, Mercury Cougar and Ford Probe. In addition to Mustang, Flat Rock will add production of the Fusion sedan later this year.