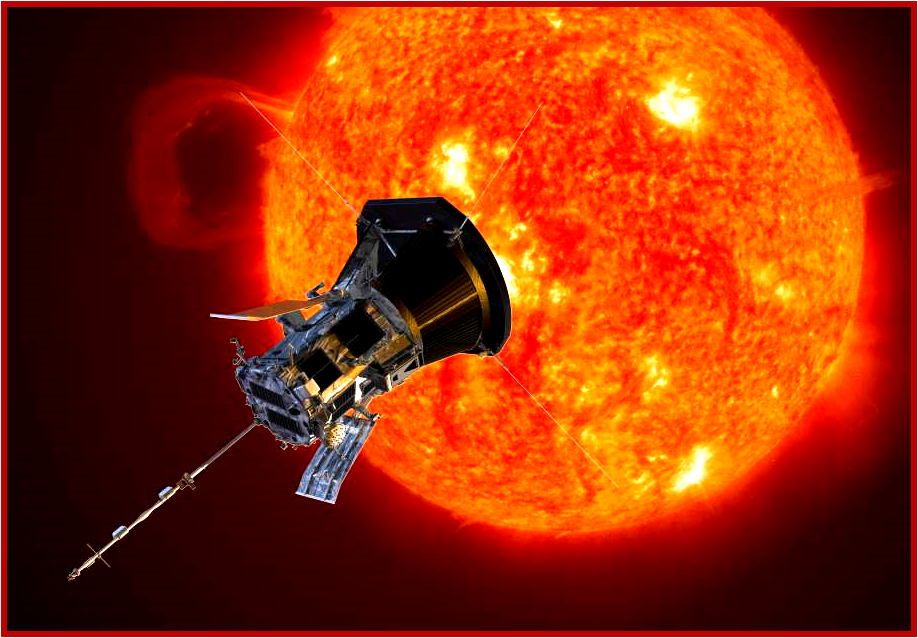 Parker Solar Probe’s four sets of scientific measurement instruments are collecting as it works under extreme conditions that no automotive engineer ever faced.

The Parker Solar Probe, NASA’s “mission to touch the Sun,” launched on August 12, and today – 5 November 2018 – it will make its first close flyby of our very own star. After NASA spent years building and testing the heat shield, solar panels, and other instruments, this flyby will be the moment of truth and a milestone – well, 15 million milestones from the sun – in the tradition of western investigation of physical matter that goes back to the ancient Greeks. It has been nearly 60 years since the “Solar Probe” Concept was introduced.

Parker will pass through the Sun’s 1 million-degree corona, moving faster and getting closer to the Sun than any spacecraft before it. But this first encounter with the Sun is just the beginning; Parker will make up to 24 close passes before the mission ends in 2025 – if it survives.

Parker Solar Probe’s four sets of scientific measurement instruments are on and collecting as it works under extreme conditions that no automotive engineer has ever faced. It will gather data in the Sun’s corona, grazing closer to our star than any spacecraft before. The instruments will attempt to characterize the dynamic region close to the Sun by measuring particles and electric and magnetic fields. Each was specially designed to withstand the harsh radiation and temperatures they will encounter as off the net instruments aren’t available.

Surveyor of the invisible forces, the FIELDS instrument suite captures the scale and shape of electric and magnetic fields in the Sun’s atmosphere. FIELDS measures waves and turbulence in the inner heliosphere with high time resolution to understand the fields associated with waves, shocks and magnetic re-connection, a process by which magnetic field lines explosively realign.

FIELDS measures the electric field around the spacecraft with five antennas (sounds like the roofs of ugly Autonomous Vehicles), four of which stick out beyond the spacecraft’s heat shield and into the sunlight, where they experience temperatures of 2,500-degrees F. The 2-meter-long antennas are made of a niobium alloy, which can withstand extreme temperatures. FIELDS measures electric fields across a broad frequency range both directly, or in situ, and remotely. Operating in two modes, the four sunlit antennas measure the properties of the fast and slow solar wind — the flow of solar particles constantly streaming out from the Sun. The fifth antenna, which sticks out perpendicular to the others in the shade of the heat shield, helps make a three-dimensional picture of the electric field at higher frequencies.

To image the solar atmosphere, WISPR uses the heat shield to block most of the Sun’s light, which would otherwise obscure the much fainter corona. Specially designed baffles reflect and absorb the residual stray light that has been reflected or diffracted off the edge of the heat shield or other parts of the spacecraft.

WISPR uses two cameras with radiation-hardened Active Pixel Sensor CMOS detectors. These detectors are used in place of traditional CCDs because they are lighter and use less power. They are also less susceptible to effects of radiation damage from cosmic rays and other high-energy particles, which are a big concern close to the Sun. The camera’s lenses are made of a radiation hard BK7, a common type of glass used for space telescopes, which is also sufficiently hardened against the impacts of dust.

SWEAP – Solar Wind Electrons Alphas and Protons investigation –  gathers observations using two complementary instruments: the Solar Probe Cup, or SPC, and the Solar Probe Analyzers, or SPAN. The instruments count the most abundant particles in the solar wind — electrons, protons and helium ions — and measure such properties as velocity, density, and temperature to improve our understanding of the solar wind and coronal plasma.

SPC is what’s known as a Faraday cup, a metal device that can catch charged particles in a vacuum. Peeking over the heat shield to measure how electrons and ions are moving, the cup is exposed to the full light, heat and energy of the Sun. The cup is made of a series of highly transparent grids — one of which uses variable high voltages to sort the particles — above several collector plates, which measure the particles’ properties. The variable voltage grid also helps sort out background noise, such as cosmic rays and photoionized electrons, which could otherwise bias the measurements. The grids, located near the front of the instrument, can reach temperatures of 3,000 degrees F, glowing red while the instrument makes measurements. The instrument uses pieces of sapphire to electrically isolate different components within the cup. As it passes close to the Sun, SPC takes up to 146 measurements per second to accurately determine the velocity, density and temperature of the Sun’s plasma.

SPAN is composed of two instruments, SPAN-A and SPAN-B, which have wide fields of view to allow them to see the parts of space not observed by SPC. Particles encountering the detectors enter a maze that sends the particles through a series of deflectors and voltages to sort the particles based on their mass and charge. While SPAN-A has two components to measure both electrons and ions, SPAN-B looks only at electrons.

SWEAP was built mainly at the Smithsonian Astrophysical Observatory in Cambridge, Massachusetts, and at the Space Sciences Laboratory at the University of California, Berkeley. The institutions jointly operate the instrument. The principal investigator is Justin Kasper from the University of Michigan.

ISʘIS – integrated Science Investigation of the Sun – ISʘIS, pronounced “ee-sis” and including the symbol for the Sun in its acronym -muses two complementary instruments in one combined scientific investigation to measure particles across a wide range of energies. By measuring electrons, protons and ions, ISʘIS will understand the particles’ lifecycles -mwhere they came from, how they became accelerated and how they move out from the Sun through interplanetary space. The two energetic particle instruments on ISʘIS are called EPI-Lo and EPI-Hi (EPI stands for Energetic Particle Instrument).

EPI-Lo measures the spectra of electrons and ions and identifies carbon, oxygen, neon, magnesium, silicon, iron and two isotopes of helium, He-3 and He-4. Distinguishing between helium isotopes will help determine which of several theorized mechanisms caused the particles’ acceleration. The instrument has a unique design — much like a sea urchin — with an octagonal dome body supporting 80 viewfinders, each about the size of a dime. Multiple viewfinders provide a wide field of view to observe low-energy particles. An ion that enters EPI-Lo through one of the viewfinders first passes through two carbon-polyimide-aluminum foils and then encounters a solid-state detector. Upon impact, the foils produce electrons, which are measured by a microchannel plate. Using the amount of energy left by the ion’s impact on the detector and the time it takes the ions to pass through the sensor identifies the species of the particles.

EPI-Hi uses three particle sensors composed of stacked layers of detectors to measure particles with energies higher than those measured by EPI-Lo. The front few layers are composed of ultra-thin silicon detectors made up of geometric segments, which allows for the determination of the particle’s direction and helps reduce background noise. Charged particles are identified by measuring how deep they travel into the stack of detectors and how many electrons they pull off atoms in each detector, a process called ionization. At closest approach to the Sun, EPI-Hi will be able to detect up to 100,000 particles per second.

By using these two instruments together, ISʘIS investigates all energies of solar energetic particles as well as high-energy solar wind particles that cannot be detected by SWEAP.