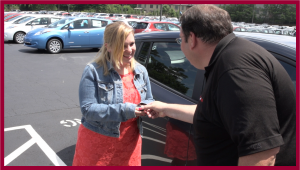 A graduate student took delivery of the 100,000th electric vehicle from the Renault-Nissan Alliance, Leaf EV in the U.S. This means that Renault-Nissan has sold more EVs than all other major automakers combined.

Allison Howard, who became an owner of Nissan Leaf earlier this month and drives the car to Kennesaw State University in Atlanta, Georgia, said, “It just drives perfectly. It’s so cool. I love it.”

Howard bought the “S” trim model 2013 Nissan LEAF, the new least expensive option. In Georgia, she can also get thousands of dollars back in tax incentives and qualify to drive in the HOV lane. Leaf prices start at $28,800 for the newly added S grade – think Sale. The least expensive 2012 Leaf had a starting price of $35,200 without tax subsidies.

The very first EV from the Alliance is a Nissan Leaf owned by engineer Olivier Chalouhi in California’s Silicon Valley. He bought the Leaf when it debuted in December 2010.

The top markets for Nissan Leaf are the United States with about 30,000 sold, Japan with 28,000, and Europe with 12,000. In the United States, the Leaf is among the top 10 vehicles sold in San Francisco, Seattle and Honolulu. The car is Nissan’s best-selling model in Norway, where more than 4,600 people have bought Leafs since 2011. EVs in Norway are exempt from value added tax (VAT) and road tolls, and they have access to bus lanes and free parking.

Electric cars from Renault and Nissan, it is said have driven approximately 841 million kilometers — enough to circle the earth more than 20,000 times. Together, they represent 53 million liters of oil saved and 124 million kg of C02 that have not been emitted, the Alliance estimates.

Renault has sold about 30,000 electric vehicles since its first model, Kangoo Z.E., went on sale in late 2011, and leads the electric vehicle market in Europe with a 61% share, including Twizy. Top markets in Europe are France, Germany and Italy.

In addition to the Kangoo Z.E., Renault also offers Fluence Z.E. sedan; the two-seat commuter vehicle Twizy; and the subcompact ZOE, launched earlier this year. Twizy is Renault’s best-selling model with about 11,000 units sold since it went on sale in early 2012.

Renault ZOE has a range of 210 km (NEDC). The car retails from €13,700 in France after the government’s €7,000-euro incentive, excluding the battery. Renault began selling the ZOE in March throughout Europe, totaling about 5,000 units thus far.

Since missing the hybrid segment completely that Toyota went on to dominate globally, reaping billions upon billions of dollars’ worth of “Green” image benefits in the process, Carlos Ghosn, CEO of both Renault and Nissan, has now “bet the farm” by investing almost $5 billion in electric vehicles. Thus far, the Nissan Leaf has not met expectations in the U.S. Nissan, optimistically, wants 10% to 20% of its sales to be EVs by 2020.

Ken Zino is an auto industry veteran with global experience in print, broadcast and electronic media. He has auto testing, marketing, public relations and communications expertise garnered while working in Asia, Europe and the U.S.
View all posts by Ken Zino →
This entry was posted in auto news and tagged autoinformed, autoinformed.com, EVs, Ken Zino, leaf, renault zoe. Bookmark the permalink.