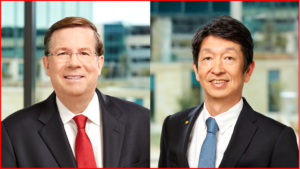 Tetsuo “Ted” Ogawa, chief operating officer TMNA, will succeed Lentz as CEO, reporting to Didier Leroy, TMNA Vice Chairman and president of business planning and operations, Toyota Motor Corporation. In his 38-year career, Lentz has been a part of a number of key moments in Toyota’s history, including:

“After finalizing our One Toyota consolidation and laying the groundwork for the future of mobility, now is the time for a new leadership team to take the next steps to help further transform Toyota,” said Lentz. “Tetsuo Ogawa, along with our executive leadership team, are all part of a deep bench with a proven track record of delivering results and a relentless focus on our customers. I’m confident the future of Toyota is in good hands with these leaders and our 40,000 North American team members.”

Toyota claimed Ogawa will focus on further transforming Toyota into a mobility company in and beyond the automotive realm. This includes modernizing TMNA’s automotive operations to improve efficiency and speed, strengthening operational execution and leading the company’s transition into new areas of mobility.

Alabama: Toyota Motor Manufacturing, Alabama (TMMAL) – $288,000,000. In Alabama, Toyota’s investment will increase annual engine capacity from 670,000 to 900,000 by the end of 2021 to increase product flexibility and adapt to market demand. New 4-cylinder and V6 engine lines will add 450 new jobs to its Huntsville, Alabama, facility, the largest hiring in the plant’s history. The investment also includes a building expansion. Overall, the plant represents an investment of $1.2 billion.

Missouri: Bodine Aluminum Troy, Missouri – $62,000,000. Investments in Toyota’s Bodine Aluminum plant in Missouri will provide equipment to produce an additional 864,000 cylinder-heads for Toyota’s New Global Architecture (TNGA). Bodine’s 900 Missouri workers currently produce more than 3 million cylinder heads a year, which are made for every Toyota and Lexus manufactured in North America. Overall, the plant represents an investment of $455 million.

Tennessee: Bodine Aluminum Jackson, Tennessee – $50,000,000. The Tennessee investment includes a building expansion and equipment to double the capacity of hybrid transaxle cases and housings to 240,000 annually. The investment will also provide equipment to produce an additional 288,000 engine blocks a year for TNGA. The plant’s 300 workers currently produce 1.7 million engine blocks a year, which supply every Toyota and Lexus manufactured in North America, and 580,000 transmission cases and housings. Bodine will add 13 new jobs to its facility in Tennessee. Overall, the plant represents an investment of $365 million.

Toyota already has expansive presence in the U.S. with 10 manufacturing facilities.  Toyota has announced a joint venture with Mazda to build an additional plant in Huntsville, Alabama. The $1.6 billion joint investment will create up to 4,000 new jobs with production slated for 2021.

Toyota’s Princeton, Indiana, plant is undergoing a $600 million transformation (previously announced) to incorporate TNGA and increase Highlander capacity by 40,000 units annually. With this, Toyota is adding 400-plus people to its team in Indiana. In Blue Springs, Mississippi, Toyota is launching the all-new 2020 Corolla on the TNGA line that included a $170 million investment and an increase of 400 jobs (previously announced). Currently, Toyota employs more than 37,000 Americans.